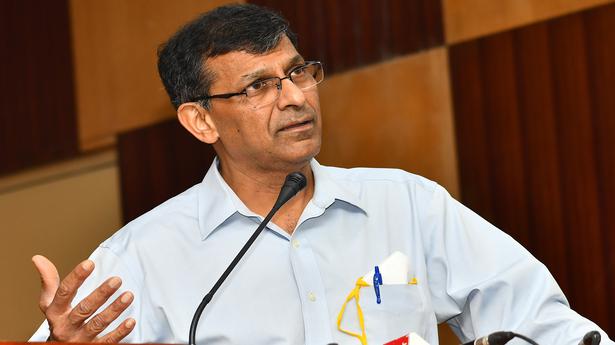 The under-performance of the country in terms of economic growth “seems to indicate the path we are going on needs rethinking”, said former RBI Governor Raghuram Rajan at the All India Professionals Congress conclave

The under-performance of the country in terms of economic growth “seems to indicate the path we are going on needs rethinking”, said former RBI Governor Raghuram Rajan at the All India Professionals Congress conclave

Former Reserve Bank of India Governor Raghuram Rajan on Saturday said India’s future lies in strengthening liberal democracy and its institutions as it is essential for achieving economic growth.

Warning against majoritarianism, he said Sri Lanka was an example of what happens when a country’s politicians try to deflect a job crisis by targeting minorities.

Speaking at the 5th conclave of All India Professionals Congress, a wing of the Congress party, here, he said any attempt to turn a large minority into “second-class citizens” will divide the country.

Mr. Rajan was speaking on the topic ‘Why liberal democracy is needed for India’s economic development’.

“…what is happening to liberal democracy in this country and is it really that necessary for Indian development?…. We absolutely must strengthen it. There is a feeling among some quarters in India today that democracy holds back India… India needs strong, even authoritarian, leadership with few checks and balances on it to grow and we seem to be drifting in this direction,” Mr. Rajan said.

“I believe this argument is totally wrong. It’s based on an outdated model of development that emphasizes goods and capital, not people and ideas,” said the former chief economist of the International Monetary Fund.

The under-performance of the country in terms of economic growth “seems to indicate the path we are going on needs rethinking,” he said.

The former RBI governor further said that “our future lies in strengthening our liberal democracy and its institutions, not weakening them, and this is in fact essential for our growth.”

Elaborating on why majoritarian authoritarianism must be defeated, he said any attempt to “make second class citizens of a large minority will divide the country and create internal resentment.”

It will also make the country vulnerable to foreign meddling, Mr. Rajan added.

Referring to the ongoing crisis in Sri Lanka, he said the island nation was seeing the “consequences when a country’s politicians try to deflect from the inability to create jobs by attacking a minority.”

This does not lead to any good, he said.

Liberalism was not an entire religion and the essence of every major religion was to seek out that which is good in everyone, which, in many ways, was also the essence of liberal democracy, Mr. Rajan said.

Claiming that India’s slow growth was not just due to the COVID-19 pandemic, Mr. Rajan said the country’s underperformance predated it.

“Indeed for about a decade, probably since the onset of the global financial crisis, we haven’t been doing as well as we could. The key measure of this underperformance is our inability to create the good jobs that our youth need,” the former RBI governor said.

Citing the strident protests against the Centre’s Agniveer military recruitment scheme, Mr. Rajan said it suggested how hungry the youths were for jobs.

“Just a while ago you saw 12.5 million applicants for 35,000 railway jobs. It is particularly worrisome when India has a scarcity of jobs even when so many women are not working outside their homes. India’s female labour force participation is among the lowest in G-20 at 20.3 percent as in 2019,” he pointed out.

Talking about the “vision of growth” of the current government led by Prime Minister Narendra Modi, he said it centres around the term ‘atmanirbhar’ or self-reliance.

“Now, to the extent it emphasizes better connectivity, better logistics, better roads and devotes more resources to it, in some way this (atmanirbhar vision) seems the continuation of the past reformed decades. And that’s good,” he said.

But, the former RBI governor said, in many ways a look at what ‘atmanirbhar’ is trying to achieve takes one back to an early and failed past where the focus was on physical capital and not human capital, on protection and subsidies and not on liberalisation, on choosing favourites to win rather than letting the most capable succeed.

Asserting that there was a misplaced sense of priorities, Rajan said the nation was not spending enough on education, with tragic consequences.

“Many (children) not having been to school for two years are dropping out. Their human capital, which is their and our most important asset in the coming years, is something we are neglecting. We are failing them by not devoting enough resources to remedial education,” Rajan said.