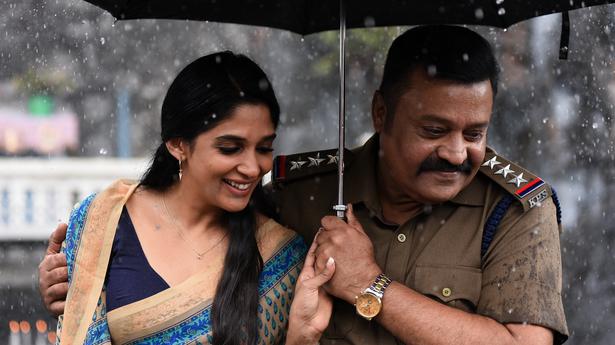 When veteran filmmaker Joshiy teams up with Suresh Gopi, there are no guesses about the nature of the film. Written by RJ Shaan, Paappan is a crime thriller, with a twist after every five minutes. The route to the killer is littered with several red herrings. Moreover, the maze of backstories can be confusing if one misses a scene. However, the director’s mastery of his craft is evident though there are times when one gets a feeling of deja vu.

Abraham Mathew Mathan (Suresh Gopi), a cop with a past as long as the storyline, is requested to join a police team that is investigating a series of gruesome murders. With his salt-and-pepper hair style and laid-back attitude, the star plays a subdued version of his previous cop roles. Sans bombastic dialogues or punchy one-liners, Suresh Gopi is on the dot as a wounded cop recovering from his many scars, both physical and emotional.

Neeta Pillai and Joshiy on the sets of Paappan
| Photo Credit: SPECIAL ARRANGEMENT

Now, the police team is headed by his estranged daughter, Vincy Mathew, enacted without any fuss or frills by Neeta Pillai. She impresses as the no-nonsense IPS officer and, unlike many Malayalam films in the past, Vincy is not put down by her team or forced to listen to a diatribe on how a woman is supposed to behave. In fact, Vincy ticks offs a junior officer who passes a tasteless remark about a woman. Nevertheless, the mansplaining comes from her father Mathan, who keeps a protective eye on his daughter.

The interesting women in the movie come as a breath of fresh air, be it Asha’s character Dr Shirly, Nancy (Nyla Usha) or Vincy’s subordinate officers. The only one who toes the line as the saccharine heroine of yore is Kaniha’s Susamma.

Even as the investigation proceeds at breakneck speed, the emotional drama involving Vincy and her father travels on an equally interesting but different track.

Although the film has a humoungous star cast, Joshiy, a master of such multi-starrers, is able to blend them easily into the film that stretches for 170 minutes. Vijayaraghavan, Kaniha, Asha Sharath, Nandu, Tini Tom, Nyla Usha, Gokul Suresh, Sajitha Madathil, Rahul Madhav, Shammil Tilakan and Ajmal Amir are all part of the star cast.

Writer Shaan has tried to root the narrative in contemporary events by touching upon caste divides and how socially-underprivileged people still get a raw deal from different establishments in society.

In addition to Suresh Gopi’s son Gokul, Ajay David Kachappilly (son of producer Kachappilly) is the cinematographer, while Joshiy’s son Abishek is assisting his father.

Jakes Bejoy has composed the soundtrack of the film. As with many Indian films, one wishes the background music was not so loud or obstrusive in some of the scenes.

As times change, many films have moved away from the conventional, long convoluted climax scenes involving fisticuffs, guns and knives. Paappan’s climax, however, sticks to the convention and goes on and on. Although one is spared the customary car chase, the last few scenes could have been trimmed, thus cutting short the duration of the film.

A must-watch for Suresh Gopi fans, Paappan is an entertainer that does not deviate from the main plot, and an interesting movie for those who enjoy crime thrillers with a few differences.

Paappan is currently running in theatres

The Hindu Business Line41 mins ago
6