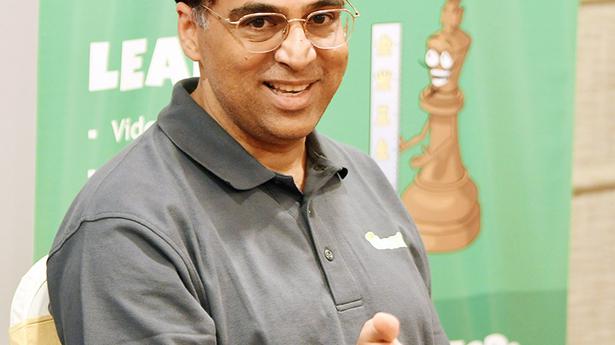 Despite closing the professional chapter in his life, Anand is still involved in the Indian chess scene. He has opinions on the latest additions to Indian chess and follows the trajectories of players Arjun Erigaisi and R Praggnanandhaa

Despite closing the professional chapter in his life, Anand is still involved in the Indian chess scene. He has opinions on the latest additions to Indian chess and follows the trajectories of players Arjun Erigaisi and R Praggnanandhaa

Viswanathan Anand, or Vishy as he is affectionately called by many, is considered one of the world’s greatest rapid chess players of his generation. His accomplishments don’t end there, yet he does not wish to add more feathers to his already heavy cap.

“I already stopped [playing],” Anand says at a recent masterclass in Chennai, “I played this cycle last in 2019; I didn’t play in the subsequent competitions. My thing is to play occasionally, just to have my knuckles touch with the sense of competition. I don’t expect to play the whole year round, or be a full time professional. The one big project in my mind is the Westbridge-Anand chess academy [which I’ve been running] for almost two years. I’m also joining Arkady Dvorkovich’s presidential team in FIDE. If we get elected next month, it will be an important project.”

Despite closing this professional chapter in his life, Anand is still very involved in the Indian chess scene. He has opinions on the latest additions to Indian chess: “I like the fact that D Gukesh has got some attention. You want to stress that he is one player who has increased his ELO rating steadily and now has crossed 2,700, a couple of times already.”

Anand has also been following the trajectories of Arjun Erigaisi and R Praggnanandhaa, “I’m happy they get acknowledged, and the strength they have is quite impressive. Arjun made the ‘A’ team easily and most players across the world believe that the current crop is very good. The nice thing about all our juniors is that they motivate each other.”

One of the ways in which Anand ensures the growth of young International Masters (IM) and Grandmasters (GM) in India is through his academy. “I see that they are all hard-working and are willing to learn,” he says about his pupils. “They are willing to put in the hours and the sacrifice. What I try to contribute is experience. There are a lot of things they can learn sooner or later,” he smiles, “but I’d rather it be sooner.”

He picks his pupils with a degree of consideration. “I look for people who are very young, and already very strong GMs (Grand Masters). Everybody in the academy, more or less, has made that cut. They became GMs very early and since they are young, they have many years to go. I think these are India’s strongest juniors now,” states the pioneer.

Some of the brightest of this generation — and generations past — happen to come from Tamil Nadu. Anand thinks that it might be a local tradition: “India’s first four IMs were from Tamil Nadu. We have always been the dominant State in that sense. Each generation of strong players start academies or become coaches who train the next generation, so we have this nice transition as well. There are parents who want to put their kids in chess. I think chess is very healthy for kids to learn. This tradition is maybe the most important in getting people to play chess.”

Morphy on his mind

Although Anand has ended his full-time professional career in chess, there is still one person he is dying to play with. “Paul Morphy, he’s very much dead but it would have to be him,” he chuckles.
Paul Charles Morphy was an American chess player born in 1837 . He is often considered the unofficial World Chess Champion. This is only because the first official world chess championship, according to historians, was held in 1886.
So why Morphy? “I liked his games,”says Anand, simply. “His games probably influenced the most people. They were the easiest to understand. It’s possible [that] in some way every top player now was influenced by him.”

The influence of global players is also strong, observes Anand. With Norwegian Grand Master Magnus Carlsen being a role model to young chess players, his recent departure from the 2023 title match will definitely have an effect on them. Anand shares his thoughts on it: “He does influence people. Inevitably everyone tries to copy the leader but I don’t know how much the effect will be.

However, Anand also observes, “ I think he [Carlson] still wants to play at the top level of chess.” While Anand has been vocal about wanting to play for pleasure, he adds, “I don’t think Carlsen’s quite the same; he has decided the World Championship format is not for him. Beyond that I wouldn’t compare our situation because our motivations are quite different.”

While talking chess is well and good, with the first International Chess Olympiad India has hosted taking place this week in Mamallapuram, what about the man behind the board? Anand has gained a lot of experience outside of chess as well, and picked up a hobby that he is happy to talk about.

“I follow astronomy quite closely.” Anand says, “I’m quite happy with the time I spend relaxing. It’s healthy to have hobbies because it gives you a chance to get away from chess once in a while. You need to sometimes switch off, to switch back on.”

The Hindu Business Line36 seconds ago

The Hindu Business Line36 seconds ago
2