How to identify the Shuddha Madhyama ragas? 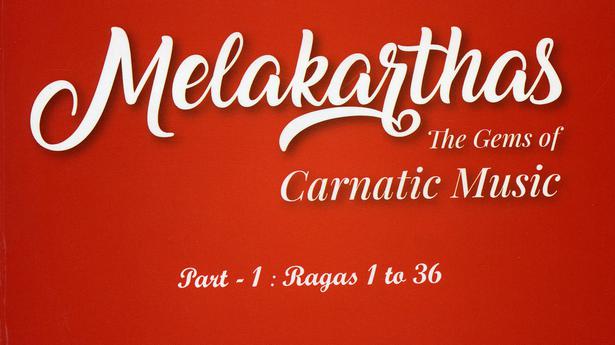 What makes a song captivating: its music, lyric, or singer? Since it is said that the seven notes form the base for almost all kinds of music, it is the tune that draws one’s attention to a song. Almost every song is based on a raga, as the entire music system revolves around the 72 melakartas. But what are melakarta ragas and how are they structured? These are explained by Bharatanatyam dancer and musicologist Vidya Bhavani Suresh in her book, Melakarta — Gems of Carnatic Music (Part 1).

The book with its red glossy cover looks interesting. But it makes you wonder if such a vast topic can be encapsulated in 296 pages. Perhaps having realised this, the author has chosen to present only the first 36 melakartas in this volume (Skanda Publications).

But how can a lay person identify such ragas? How are they further divided into chakras based on the notes? How did each raga gets its name and number based on the KA-TA-PA-YA-DI formula? Vidya, a disciple of senior musician A.P. Komala, has dealt with these aspects in the book.

For instance, Vidya’s choice of ragas such as Mayamalagowla (51) Thodi (8), Kalyani (65) and Karaharapriya (22), and her description of how they are ascribed the numbers based on the Katapayadi formula, are quite informative.

The next 242 pages deal with each of the shuddha madhyama ragas, from Kanakangi to Chalanattai. Beginning with what makes Kanakangi a tough raga and queen of all vivadi ragas, to why Senavati, the seventh Melakarta and the first raga of the second chakra (Netra), is one of the most favourites, the chapters give readers a fair idea of the swara variants used in each of the chakras.

In the chapters on ragas such as Gayakapriya, Mayamalavagowla and Chakravakam, Vidya explores the third chakra (Agni), and explains the use of the D and N combinations that determine the ragas that are included under this chakra.

Mayamalavagowla, the 15th melakarta, is the first raga taught to students of music. They learn to navigate through this raga before learning alankaram, and a few geethams. The mention about the R1-G2 and D1-N2 combinations, and how each note accentuates the mood of this raga are informative. Perhaps the beauty of its swaras made Muthuswami Dikshitar compose his first piece, ‘Sri nathadi’ in this raga.

The author has adopted similar approach to explain ragas in the next three chakras — Veda, Bana, and Ritu — which includes a few well-known ragas including Kiravani, Natabhairavi, Karaharapriya, Charukesi, Harikamboji, Dheera Sankarabharanam, Shulini, and Chalanattai. The Koteeswara Iyer kriti in Tamil, ‘Edhayya gathi’, is a beautiful composition set to raga Chalanattai. The author has also made a mention of lesser-known ragas such as Hatakambari, Jhankaradhwani, and Varunapriya and their vakra prayogas.

The description supported by suitable examples and references not only makes it easy for the readers to understand the concept, but also remember the ragas and their structures.