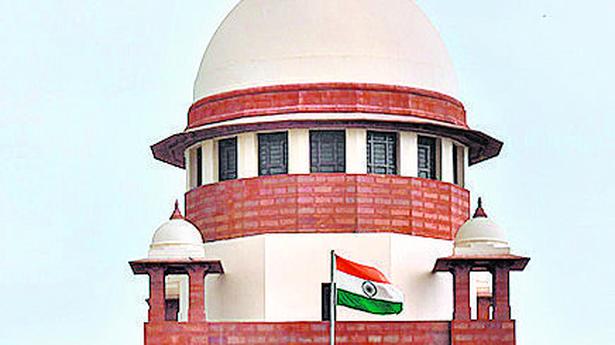 The Supreme Court on July 26 orally asked the Centre to find out from the Finance Commission whether there is a way to curb political parties from promising and distributing “irrational freebies” during election campaigns.

The government on Tuesday received record bids worth ₹1.45 lakh crore on the first day of the largest-ever auction for telecom airwaves, surpassing the expectations of bids worth ₹80,000 crore-₹90,000 crore from the entire auction.

Will continue to turn to you for counsel, PM Modi tells Ram Nath Kovind in letter

Prime Minister Narendra Modi termed former President Ram Nath Kovind‘s personal journey from a small village to the highest office in the country a “a parable for our country’s evolution and development, and an inspiration for our society”. He said this in a letter that he wrote to Mr. Kovind on the eve of his demitting the office of President of India on July 24. Mr. Modi also stated that he would continue to turn to Mr. Kovind for advice and counsel.

As many as 36 people died after consuming spurious liquor in the Botad district of Gujarat, where prohibition is in force. Over 40 people are battling for life in various hospitals in Botad, Bhavnagar and Ahmedabad.

The generation of unique disability IDs (UDIDs) had increased from an average of 5,000 IDs a day to an average of 7,000 to 9,000 daily during the 90-day Azadi Se Antodaya Tak campaign, officials of the Department of Empowerment of Persons with Disabilities (DEPwD) of the Social Justice and Empowerment Ministry said on Tuesday.

A day after a group of Bajrang Dal members allegedly created ruckus at a pub in Mangaluru in coastal Karnataka, the City Police on Tuesday decided to initiate only security proceedings under Sections 107 and 110 of the Code of Criminal Procedure as neither the affected students nor the pub management came forward to file a complaint.

The Defence Ministry on July 26 approved the procurement of military equipment and weapons worth ₹28,000 crore, which included swarm drones, carbines and bulletproof jackets.

Over 1,800 NGOs’ FCRA licences were cancelled by the government for the violation of provisions of the law in the last three years, Union Minister of State for Home Nityanand Rai said here on Tuesday.

The Ministry of Home Affairs has granted security clearance to Air India’s CEO and MD-designate Campbell Wilson. The decision will pave the way for Mr. Wilson to formally take charge of the airline. Mr Wilson, a New Zelander, joined the airline on June 20.

The All-India Chess Federation, in collaboration with the Tamil Nadu government, is just a few moves away from hosting the 44th FIDE Chess Olympiad.

Amarnath Yatra has been suspended between Panchtarni and the cave due to inclement weather, officials said on July 26. Heavy rainfall occurred in the mountains around the holy cave shrine this afternoon due to which water level in a nearby stream also rose, they said.

The Parliamentary panel constituted to examine the Bill that seeks to raise the age of marriage for women to 21 years is likely to seek yet another extension for three months to submit its report.

‘LIC stock performance must be gauged over medium term’

The LIC Board and management ‘have been continuously engaged’ in improving its performance parameters and the performance of the recently listed insurance behemoth’s shares must be analysed over a longer period, the Finance Ministry told the Rajya Sabha on Tuesday.