Usha Uthup discusses her biography ‘The Queen of Indian Pop’ 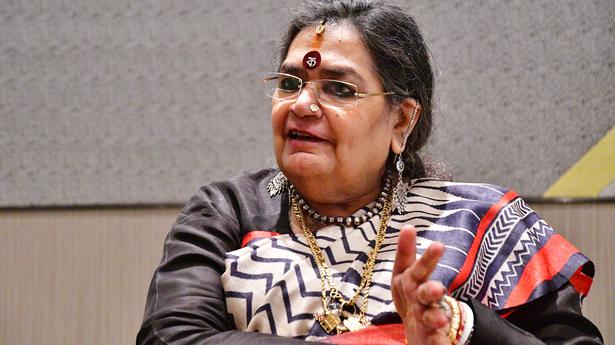 Usha Uthup talks about her biography The Queen of Indian Pop, and why she likes to call herself people’s singer

Usha Uthup talks about her biography The Queen of Indian Pop, and why she likes to call herself people’s singer

Indian pop icon Usha Uthup is 74 and she has been singing for 53 years. She can sing jazz, folk, pop, rock and in Bangla, Assamese, Gujarati, Tamil, Malayalam, and in a total number of 17 Indian languages and eight foreign languages. “It’s not just for the records. I am regularly singing in all these languages,” says the singer.

Usha says her biography  The Queen of Indian Pop: The Authorised Biography of Usha Uthup by Vikas Kumar Jha, translated by Srishti Jha (Penguin) celebrates life and music. “When people ask me my genre of music, I realise that I truly am a people’s singer. It’s quite amazing, especially when you are singing in so many different languages. For example, while performing western music and when I notice a Tamil person in the audience, then I change to singing ‘Bampara kannaale kaadhal sangathi sonnale’, There is an instant connect. None of this is planned, I built on it from show to show.”

Similarly, her legendary bindi-saree-gajrae look happened because of her South Indian middle class upbringing where women wore sarees with jasmine flower to adorn their long braids. “It was not a conscious marketing decision to position my image. I’ve been wearing bangles from ever since I can remember. Even when I am taking an early morning flight, the security girls at airport ask me  poo engey,” she laughs, adding, “I cannot grumble about it.”

Her first memoir was penned by journalist Vikas Kumar Jha in Hindi called  Ullas  ki  Naav. “It never struck me that I should write an autobiography. When Mr. Jha approached me, I never imagined a western or pop music singer being written about in Hindi. He got my trust and said ‘yeh jeevni hogi’ and that’s how it all started.

For translator Srishti Jha, the book is special as she was getting a peek into the Indian pop queen’s life, but also sharing space with her father on the same book cover. Though some of her evergreen classics include ‘Hari Om’, ‘Rambha ho ho’, ‘Darling’ and ‘Jeete hai shaan se’, Srishti picks ‘Darling’ as her favourite. “ Her energy is amazing. And her voice has been relevant across five generations. A 15-year-old would break into dancing when he hears ‘Rambha ho’. I look at her as a youth icon. Usha  ji has always said that she is an ordinary woman but she’s lived an extraordinary life,” adds Srishti.

Her biography covers her childhood days in Mumbai to her rise as a pop icon in India as well as her philanthropic work. “I’d climb a tree, sit with a pillow and read a book,” she says, bursting into a laugh adding that certain chapters moved her like the time “when I couldn’t walk because of the after effects of polio, but I overcame it”.

“I don’t talk much about my problems. I don’t make a sensational copy, which is why you haven’t heard me talk about many things for so many years except the things that are known about me.”

Though she wished that she learned sight-reading or notation that would have helped her career, regrets doesn’t pull her down. “Technicalities overrule magic of the stage and magic of the moment. Because of my limitations, I don’t even begin to try and sing like S Janaki, Chitra or Lata Mangeshkar. Why would I want to sing like KJ Yesudas? Just sing like yourself. People from North India may not be familiar with all Tamil or Malayalam songs, but they might just like the melody, presentation, and listening to a ‘Ottagaththa Kattiko’… Being able to communicate is important. A song is a song and always bigger than the singer.”

Recently, Usha Uthup played Akshara Haasan’s grandmother in  Acham Madam Naanam Payirppu that released on Amazon Prime. People still remember Maggie Aunty of  7 Khoon Maaf and the Malayalam film  Pothan Vava where she played actor Mammootty’s mother. “I’d love to do a film where I am a bartender or selling some stuff on the road or may be a table cleaner in a restaurant, but provided I hold the secrets of people visiting my place. Even if it’s a cameo, it has to be a powerful role.”