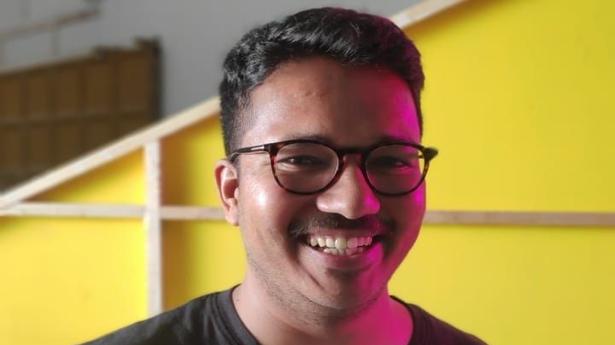 Bengaluru-based artistes release a music video, which is inspired by the lyrics and compositions of Sajjad Ali

Bengaluru-based artistes release a music video, which is inspired by the lyrics and compositions of Sajjad Ali

The video features Siri Ravikumar, Goutham C and Maahir and is directed by Raghav. “Har Zulm” is sung by Shrikanth Yajurvedi and the song is based on a Sajjad Ali song. “Sajjad is a director, composer and lyricist based in Pakistan,” says Shrikanth. “The first time I heard an Indian version of the same song, I wanted to hear the original. That was how I first heard Sajjad Ali’s original. The tune was addictive and the lyrics soul bearing. I just could not stop humming it. That is when we decided to make our version of the same song, which talks about three friends and the journey.”

Actor Goutham in a still from the music video
| Photo Credit: Special Arrangement

‘Har Zulm’ is an homage to Ali’s song, says Goutham. “The music video is set in the 80’s and takes you into the journey of three friends who were once close and how they go through the complexities of emotions.”

‘Har Zulm’ is their second music video, their first being ‘Sahane Torede’, which was released a few months ago on Rakshit Shetty’s Paramvah Music Channel. “This song was talks about mental health,” says Goutham. “It was inspired by the lockdown and COVID-19. Goutham featured in ‘Sahane Torede’ video directed by Raghav. Goutham is known for his role in SD Aravinda’s Mataash and is currently awaiting the release of Jayanth Seege’s Love in the Time of COVID, where he will be sharing the screen with Rakesh Maiya.

‘Har Zulm’ was created on a pure collaborative basis, says Goutham. “All of us from the cinematographer, Vishnu Tenkayala, and actors to the make-up man, came together to create this video. The song was shot on a farm house and a college in Bengaluru. The team enjoys making music videos as a music video has an infinite shelf life and can go viral, irrespective of the time it was released.”