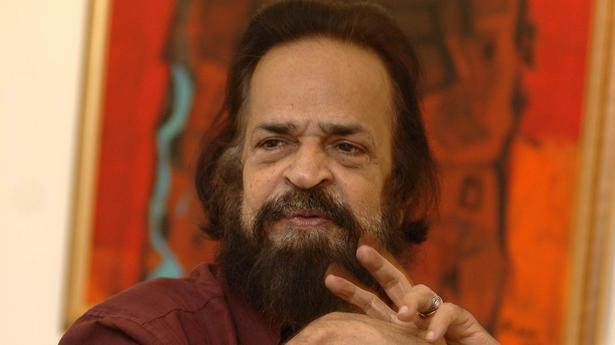 Canvases in red, or beyond the definition of red, have always been a part of Kudallur’s paintings

Canvases in red, or beyond the definition of red, have always been a part of Kudallur’s paintings

Achuthan Kudallur has now travelled beyond the abstractions of his canvases, filled with signs and symbols encoded in colour.

Canvases in red, or beyond the definition of red, have been a part of Kudallur’s paintings ever since I can recall. It explains why Gita Hudson, who has been documenting the works of South Indian artists, has produced a video of Kudallur’s work, ‘Red Symphony’. As the camera pans over the paintings that were exhibited at the Durbar Hall Art Gallery in Kochi, there are hypnotic drumbeats of Kerala’s ritualistic performers marking the pulse of life and death.

Against the red of his abstract creations, you often get tiny streaks of white. They appear like pulsars, pin-points of light that he has instinctively placed at random to create a sense of expanding space. At other times, Kudallur fragments his canvas with black strokes. Like black holes that devour the light, or create them anew, they reflect the concerns of the tantric rituals enacted in Kerala temples when patterns in colour placed on the floor are stamped out by the feet of performers.

As his name suggests, the artist belongs to Kudallur, a town in the Pattambi Taluk of Palakkad that borders one of the most majestic of Kerala’s rivers, the Bharathapuzha. The ebb and flow of these rivers haunt those who have lived by their banks.

“I would like my paintings to flow from my hands like a child playing with colours in a stream of water,” he had once confessed. Quite apart from the iconic reds, with their intimations of darkness, Kudallur also painted abstractions loaded with a palette of the darting blues of a kingfisher, the yellows of the flowering amaltas and palm frond greens that decorate the offerings made at the harvest time of Vishu. In retrospect, they appear to celebrate memories of a carefree childhood. He had been trained to be a civil engineer, maybe even a writer, as he once admitted. When he was introduced to the Government College of Art in Chennai, and a group of art lovers who started the Madras Art Club, he discovered his vocation.

In time, he received several honours and particularly enjoyed the camaraderie of the art camps in different parts of the country. He was invited to the 7th Art Triennale in New Delhi in 1991, as well as the Asian Art Show in Fukuoka, Japan.

“He was a self-taught artist who believed he had to try all the harder because he had something to prove to the world,” explains Pravin Kannanur, the theatre director, activist and artist of vast swirling canvases. “He was also deeply interested in literature, film, and the lives of people both in his adopted States of Tamil Nadu and Kerala.” To some extent, he was what the French call a ‘flaneur’ a wanderer who trod along many paths, engaging with what interested him with a sensual delight but never allowing himself to be seduced by them. His passion he reserved for his canvas. He believed that art should be part of everyone’s life, not just of the elite.

“It was through Yusuf Arakkal that I met Kudallur. They were both very good friends but also very different,” explains A.M. Sikander, who bought an early work of Kuddalur, maybe on the recommendation of the late Arakkal, his cousin. “While Yusuf was a friend to the world, Achuthan seemed much more introverted. When I showed him my painting, he looked at it in surprise and muttered: ‘I don’t know when I painted this’. He seemed to be drawn into the depths of what is essentially a dark canvas of reds and blacks.” Sikander says that what intrigued him about the work was that the layers of paint created different interpretations.

“It’s not my intention to give you an interpretation of my work. It’s up to you to find your own meaning, or not at all,” he told Mayur Shah, the young owner of the Focus Art Gallery in Chennai.

Shah confesses that despite the difference in their ages, Kudallur became one of the driving forces in his life and work. “He was not just my friend and teacher, but also a mentor. He taught me to look at art from an entirely different perspective, not just to be judged by commercial success. He was keen that we make art available to young collectors, to look at the work of new artists and give them the encouragement to exhibit their work in our gallery.” In a sense, that debt was repaid, when Shah was there with Achuthan at the end. He was 77 years old.

“He was the most genuine of artists,” says Shah, “His only truth was being true to oneself.”

The Chennai-based writer is a critic and cultural commentator.