As she opens the first Sri Lankan restaurant Rambutan, in London’s Borough Market, Cynthia Jambulingam releases her debut cookbook, the story of lost homeland woven together with her family’s culinary gems

As she opens the first Sri Lankan restaurant Rambutan, in London’s Borough Market, Cynthia Jambulingam releases her debut cookbook, the story of lost homeland woven together with her family’s culinary gems

If you pick up Rambutan, Cynthia Jambulingam’s debut cookbook expecting to rush straight to the recipes of gorgeous Sri Lankan fare, you are going to have to pause. There’s no ‘jump to recipe’ button here, and that’s a good thing too. The recipes — peppered with charming stories and pictures of family gatherings, dinner tables, and picturesque locales borrowed from family albums — have been carefully put together by Cynthia, who is all set to open a restaurant in London in October. This, after running a restaurant incubator from 2013, and moving on to cook her way through pop ups at Asma Khan’s Darjeeling Express, Palm Heights in the Cayman Islands, and Quo Vadis in London since 2019.

In Rambutan, you will learn why her mother can’t cook without curry leaves, how Cynthia overcame the fear of cracking coconuts, and relive her childhood memories of her father, a strict disciplinarian, bringing home a bucket of fried chicken on the last day of summer exams. You will also learn of her father’s journey from being tortured and brutally beaten as a shop boy to the University of Ceylon, and eventually to London, and her mother’s struggles as an immigrant

An image from the pages of Rambutan

. Stories from the island

As Nigella Lawson aptly says in her review of the book, ‘the stories that lie behind a recipe are actually an integral part of it, and a prized part of it, at that’. And true to its word, Rambutan is as much about the recipes as it is about their history.

“It’s difficult to disentangle the food and the story; they come together,” says Cynthia, of her conscious decision to have a story-first approach to the cookbook, over a Zoom call from her London home. “There aren’t that many Sri Lankan Tamil writers who have been able to tell the story about Sri Lankan food and the country. I wanted to do justice to its story,” she says, adding how food is inherently political, and an outsider to the island might give you a touristy idea of Sri Lanka — just beaches and snacks — “but there’s so much more to the island than that”. “The food is more than just recipes. It’s also about the history of Sri Lanka, about politics, about our culture, and families,” adds the 41-year-old chef born in Coventry, England.

For the “part memoir, part manual, part travel guide”, as she describes the book, Cynthia travelled to Sri Lanka in 2021 for six months and spoke to everyone from her parents (who moved back to the island in the early 2000s), to aunties, and cousins. “While I had my own memories, I asked them a lot about what happened. I talked to my cousin’s wife, who was hurt by shelling and had shrapnel in her legs at the end of the 2009 war, and her daughters about their memories. I spent a lot of time reflecting on what I could remember from when I was a kid.” A snapshot from Rambutan

And then, the food. Much of her time on the island was also spent cooking with her mother, and her friends. “My mom actually transcribed my grandmother’s recipes into a notebook. It has her classics: kool, a seafood gumbo of the Tamil community thickened with the odiyal flour, her lamb curry, Jaffna crab curry (that she calls the book’s and the island’s best recipe), sodhi… My Tamil isn’t very good so I read them very slowly and tried to understand all the instructions,” says Cynthia, who also worked on developing her own relationship with the country, and began crafting recipes based on her experiences eating out at cafes and roadside stalls.

This is why, while most dishes are “pretty faithful to the originals”, many have her spin. “There’s a grilled ambul fish dish in the book, which is a take on an old Sinhalese fish preparation called ambul thiyal, which is quite sour and quite strong tasting.  I have created a lighter, grilled version with yogurt. Even the Watalappan tart was made in a non-traditional way — in an oven and not a bain-marie. Some dishes taste more fun this way,” Cynthia says of the book with sections dedicated to vegetables and fruit, meat, pickled dishes, rotis and hoppers, among others.

As Cynthia spent most of the COVID-19 lockdown hunting and testing recipes, putting together over 80 in the book was no mean feat. Her toughest dish to master was the Lamprais. “It is a sacred dish for Sri Lankan readers, and it’s not the traditional recipe which is why it’s called Lampra-ish in the book. Sri Lankans go berserk if you touch it, so I’m playing with fire!” she says, adding how, in its original form, the dish is quite complicated with 12 elements including curry and rice. Cynthia has only got six elements in the book, only some of which are traditional. “Just getting all the timing of everything right was a challenge. I recreated it close to six times, but tested the individual elements many more times.” While she addresses the definite links between Sri Lankan fare with Kerala and Tamil Nadu cuisine, Cynthia is quick to add that “Sri Lanka’s traditions, food, and people are unique”. The spice mix on the island is distinct too. “The roasted curry powder that we use in Jaffna has a smoky flavour and is quite coriander heavy. Dishes like the black pork curry, pineapple curry, and mango curry are unique to the country,” says Cynthia, adding that there is also a Malay and Javanese influence in their food, which means that “we have lots of sambols, a big staple in the country”.

Which leads us to the section in Rambutan dedicated to the condiment — from versions with daikon, mint, carrot and kohlrabi, to green mango, and black sesame. “I didn’t know there were so many! The green mango, for example. I never had it in London because my mum couldn’t find it there, but in Sri Lanka, you get it a lot. So I discovered such things when I went back,” says the author. 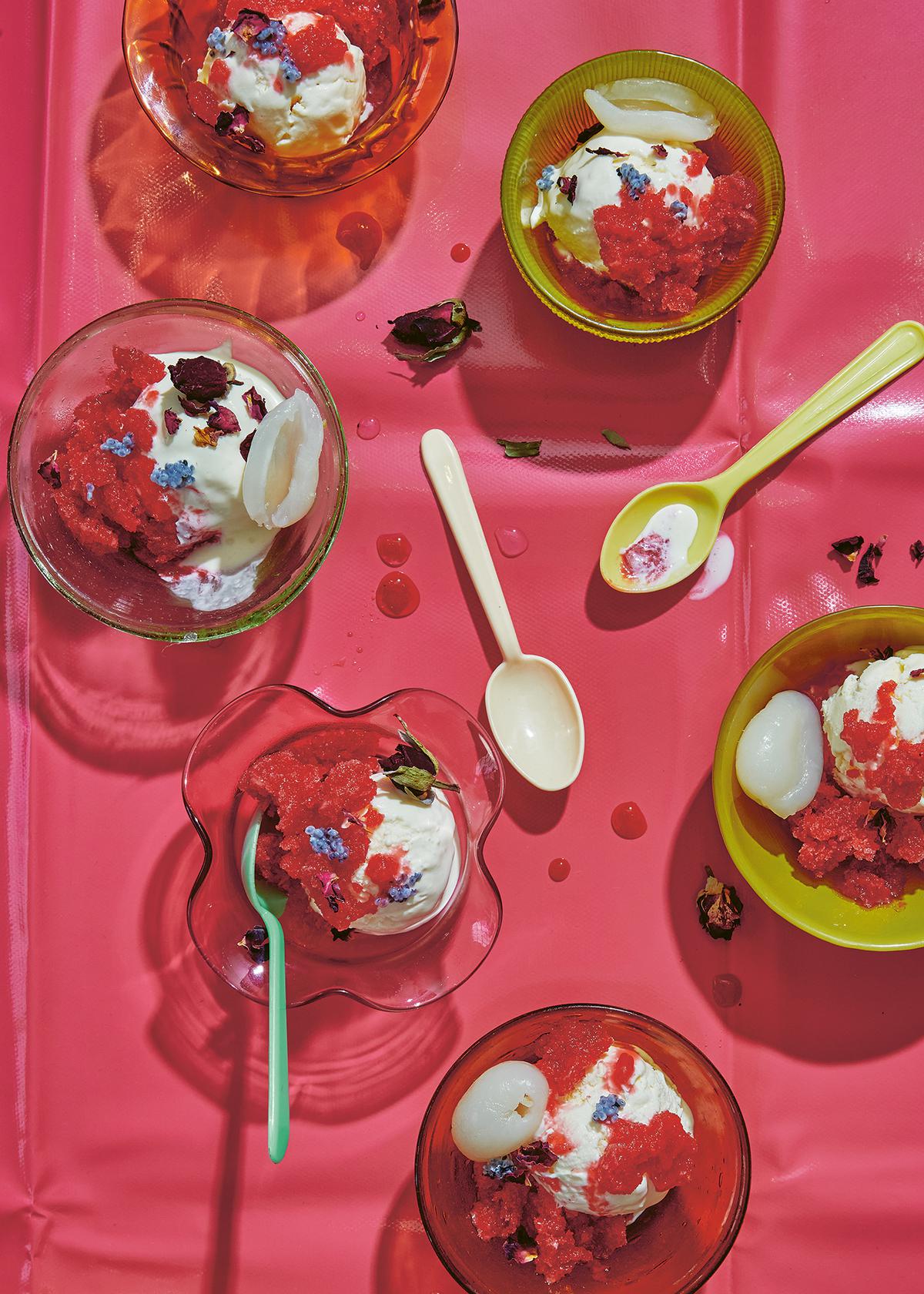 Off to Borough Market

Curious about the choice of name for the book — and her upcoming restaurant of the same name — Cynthia says it’s partly from a childhood memory of Athappa, her father’s younger brother, introducing her to the fruit on a hot summer day. “I guess the melancholy and sadness I have about the experience of being Tamil and to have lost a homeland and to have lost so much of our family, to have lost a connection to Sri Lanka. Also, rambutan is the same word in English, Tamil and Sinhalese; it’s one of the few common words.”

Excited about her restaurant, in the heart of London’s Borough Market, Cynthia says at present, soft serve ice cream in Sri Lankan flavours of mango and cashew, jaggery, watermelon and hibiscus, and coconut and rice, are being offered as a teaser in the busy market beside the London Bridge. “We’ll be the first South Asian restaurant here, so it will be very exciting to represent the cuisine,” says the chef.

Born to Sri Lankan immigrant parents, Cynthia is candid about their struggles, and she says in the book, she hasn’t shied away from the country’s agonising history of war, oppression, and slavery. “These chapters, too, are part of the story of our food.” Cynthia with her parents

In Rambutan, she writes about how her father was disappointed when she started becoming interested in food, and felt it was far from a career with stability that paid well. What does he have to say now? “I think he’s proud of the book. He thinks it is an interesting story, partly because it is a lot about him,” laughs Cynthia. “But I’m sure if I told him that I was going to quit food and start becoming a newsreader for the BBC, he would be thrilled.” And her mother, whose tough life as an immigrant has been beautifully detailed, she recalls the day she got the book deal. “My mom simply said, ‘is it a big deal?” Cynthia concludes with a laugh.

Published by Bloomsbury, Rambutan is priced at ₹1,199 and available at leading bookstores