‘Jaadugar’ review: A heartfelt coming-of-age film that meets the goal 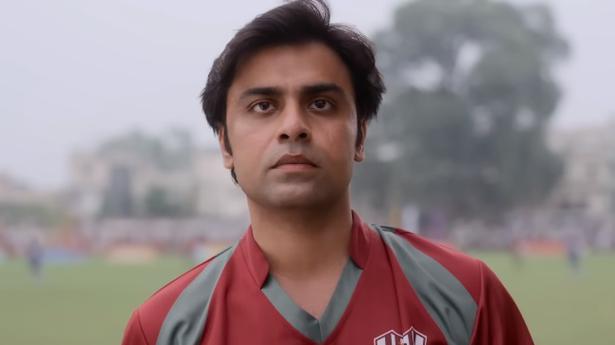 An engaging slice-of-life cinema that sincerely tries to steer clear of the cliches, Jaadugar addresses complex issues of love and commitment with unvarnished charm. Director Sameer Saxena adroitly fuses disparate elements of football and magic to conjure up a convincing coming-of-age story that makes you fall in love with the characters of Neemuch, a town on the Madhya Pradesh-Rajasthan border that loves its football. The limpid writing provides a steady stream of hasya rasa, or a rich blend of folk and literary humour, that is diminishing by the week in Hindi cinema, perhaps, because of the changing profile of screenwriters.

Storyline: A magician, who has no talent in football, has to win a local tournament for love and family

Sameer and screenplay writer Biswapati Sarkar have cut their teeth in The Viral Fever (TVF) and the dialogues have the flavour of Panchayat and Kota Factory. However, the shorter length ensures that before the verbosity gets under your skin and before the narrative falls into a pattern, the goal is scored.

After his goalkeeper brother dies in an accident on the way to a football match, Coach Pradeep (Jaaved Jaferri) vows to win the local tournament and fulfil the dream of his late brother. The resolute Pradeep, however, meets a lot of curveballs in his quest. Even Meenu (Jitendra Kumar), his late brother’s son, is more interested in learning magic than in pursuing football.

Always ready to lose his heart, Meenu is a flawed character, one who perhaps feels that love is like one of his magic tricks. Keen to follow in the footsteps of his guru Magician Chhabra (Manoj Joshi), Meenu believes that only a true lover could perform true magic but could not practise the dictum.

It is an interesting terrain for storytelling where the hero knows the ideal situation but doesn’t have the guts and gumption or the magical wand — that the commercial Hindi film hero is born with — to reach there. Reeking of misplaced confidence, Meenu doesn’t even realise the difference between approaching a girl and stalking her. After losing a girl called Ichchha (desire), he finds some direction with Disha (Arushi Sharma) but his self-seeking ways almost ruin it again, as this time he has to choose between saving his love or the family name in football.

Jitendra Kumar delivers an honest performance as a social chameleon. However, even as he is efficient, his performances have begun to give the feeling of a machine that does the job but lacks that proverbial magic, or the X-factor, that helps such characters cross over to mass acceptance. That spell comes from the players that constitute the Adarsh Nagar team. Every time the film returns to the football field, it sparkles. Be it the loutish librarian Madan (Imran Rasheed) or the rakish insurance agent Lali (Raj Qushal), every character is well-etched and colourful.

With a hint of vermilion in the forehead, the solo female player (Raksha Pawar) dribbles past the opposition as well as social barriers. Then there is a struggling lyricist who becomes the bard of the team. The humorous football commentary rendered by doctor Doshi (played by director Sameer) and Nema (Rajeev Nema) provides much more than just the details of the game.

The best part is that unlike the football coach efficiently played by Javed Jafferi, Sarkar’s screenplay doesn’t convey the message through preachy sermons. From the Dronacharya-Eklavya reference to Chekov Kulfi, the nods to the myths and literature are woven into the storyline. Like a good magic show, Jaadugar doesn’t always appeal to the mind but the heart accepts the earnest attempt.

Jaadugar is currently streaming on Netflix.