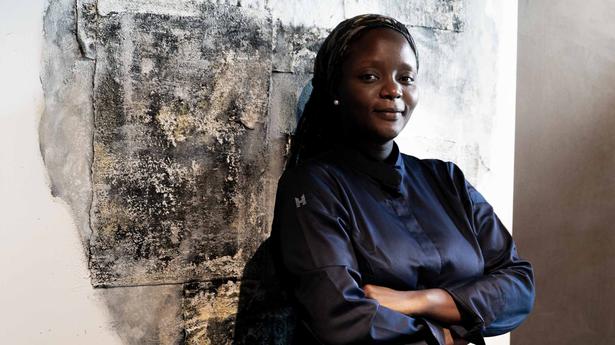 Like many young chefs, Fatmata Binta is on a mission to rediscover family recipes: Only her job is more challenging than most, since her family spans 20 million nomadic pastoralists across West Africa.

Winner of the prestigious 2022 Basque Culinary World Prize, Binta shot to fame for showcasing sustainable nomadic culinary culture. She has been chosen for the €100,000 prize from more than 1,000 nominations across the globe for her inspiring ‘Dine on a Mat’ pop up kitchens, serving tasty, sustainable, Fulani-inspired meals to empower her community, particularly its women.

The Ghana-based chef, who was raised in Freetown, Sierra Leone, by Fulanis of Guinean descent, went to culinary school in Nairobi, Kenya, and unites all these influences in her cooking.

Over the phone from Accra, she is warm and enthusiastic, punctuating the conversation with laughter and stories about her mother and grandmother. No wonder her Fulani family grows stronger every year: “I go into the communities and spend time with them so I can document their recipes,” she says, stating that though the pastoral tribe is spread across the continent, there are common threads that hold them together. “When I visit Shai Hills in Ghana, I feel like I’m in my grandmother’s house. In Abuja, Nigeria, too, I met the community, and we just clicked. It’s easy. It’s simple…”

Binta explains how the close-knit Fulani communities, with about anything from 20 to 100 people, shaped her as a chef. “In Sierra Leone, even when there was a shortage of food, our neighbours would come together, everyone would bring an ingredient, and we would cook and eat together, sharing everything.”

When Civil War broke out in Sierra Leone (1991-2002), an eleven-year-old Binta moved with her family and community to a small village in neighbouring Guinea. “It could not sustain us, there was not enough food: that’s when my grandmother started to grow fonio to feed us all.” The ancient grain is traditionally grown and consumed in West Africa. “It’s a super food: gluten free, easy to grow and cook,” says Binta. Fonio is disease and drought resilient, and hence is a possible answer to food security and climate challenges, she adds.

A large part of Binta’s crusade is about encouraging more people to eat and grow fonio, which is always on her menus. After all, it sustained her community and the village through the civil war. “We collected water from the stream, and carried it home on our heads. We cooked together over a wood fire and three stones. We ate sun-dried grains, and most of our vegetables came from the backyard,” says Binta adding, “That is how I learnt that food does not have to be complicated to be good. In the village, nothing was fancy, but meals were delicious.”

Her menus follow this principle — simple seasonal produce made into mostly vegetarian meals. “We sell cattle, so we don’t eat much meat,” she explains, adding that their diet is mostly plant-based. “We make stews with onions, tomatoes and hot chillies, and eat them with offal. We are big on sun-dried vegetables, since the community is traditionally always moving.”

After training in French and European food in Nairobi, where she also learnt how to cook “simple and honest” Kenyan food, Binta worked in restaurant kitchens for a while, then about four years ago, she quit. “I felt like I needed to promote Fulani cooking — it is good, it is sustainable, and people need to taste it,” she says, adding “I wanted people to sit on the floor, to be grounded. To learn how powerful it is to to eat together.” Much to her mother’s dismay, Binta started hosting free meals, which she funded with her savings. “She used to call me, and say ‘Are you sure this is what you want to do?’ — she questioned me for a long time,” chuckles Binta, adding that her mother was finally convinced when she saw an article on her daughter in an in-flight magazine. “She took it to every family gathering… It was literally in her bag all the time!”

It took a year to convince people to pay, by which time Binta had run through her savings. “It was a crazy idea, but I would call 15 people home twice a month. I wasn’t worried because I was also enjoying it — I love feeding people. “ Meals were simple: fonio, peanut butter soups, stews, cassava…. As her pop up kitchen became popular, she began travelling the world to host it. And exploring Africa for menu ideas. “I was travelling for inspiration — and the Fulani people were always open to helping me. I realised it is time I collaborate in a more meaningful way, where I don’t feel I am taking from them. Because I can see the problems they are facing,” says Binta. Her Fulani Kitchen Foundation empowers women, focusing on remote communities. It aims to meet social, educational and community needs using traditional ingredients and recipes, by turning them into sources of income. The initiative currently benefits more than 300 families from 12 communities as well as four regions of Ghana.

Now, she plans to move to north of Ghana, where she is building a centre for women across four acres of land, where they can learn indigenous crafts and process fonio, which they will buy and distribute locally. “It will also be a safe space for the women,” she says.

The money she won from the Basque Culinary World Prize is going into this project, says Binta, who plans to reduce the number of pop ups she does every year, so she can dedicate her time to the centre. However, she does believe that Dine On A Mat dinners are a powerful way to teach people how food can unite communities and ground you.

“Even when I travel, and I am at fancy restaurants, I like to eat with my hands,” she says, adding with a laugh, “My friends say, ‘You can take the girl out of Africa, but you can’t take Africa out of the girl’.”