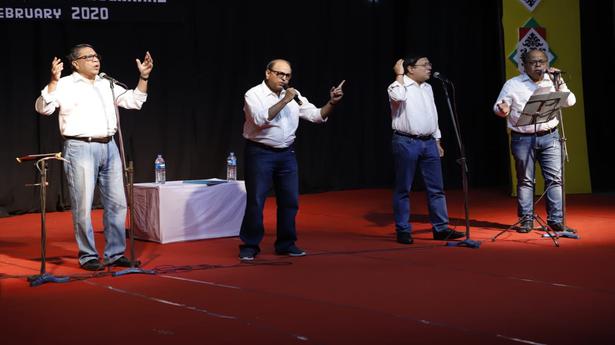 They are among Kolkata’s most sought-after doctors: Dr. Tapas Raychaudhury, renowned heart surgeon who, in 2018, led the team that conducted eastern India’s first heart transplant; Dr. Raja Roy, interventional cardiologist; Dr. Shivaji Basu, urologist; and Dr. Vivek Datta, eye surgeon. Forget music, even getting to meet them during the day could prove challenging. Yet these men of medicine have, as a band called Byatikromi (‘the exceptional’), outlasted most bands and troupes with their 19-year run of belting out old hits.

Today, the youngest member of Byatikromi is in his late fifties and the oldest in his early seventies; and of the 19 years they have been together, two were taken away by the pandemic, which also altered the way they perform – from more people on stage to just four of them singing in harmony to recorded tracks; but what’s gratifying for them is that they still get to perform. Last week, they performed at the Bengal Club; the following week they have a show at the Fortis Hospital.

“We’ve performed all over the country — we must have done over 200 shows in these 19 years. People ask us how we manage to find time for music in spite of being so busy, but when you are passionate about something, you always find time for it,” said Dr. Roy.

For a long time, the group sang old, popular Bengali songs, and over the years, as their own popularity as a group grew, they also added old Hindi and English numbers to their performances. While what they sing on a particular evening depends largely on the mood of the audience, the songs invariably belong to the unhurried times when music was more about melody than noise – the era of Salil Chowdhury and Hemant Kumar and Cliff Richard.

Their journey began in 2004, when they first happened to perform together at Camac Street. “The audience was simply mesmerised,” recalled Dr. Roy. In the audience was a hotelier from Bangladesh, who took the doctors to Dhaka where they performed with a group of local doctors. The trip culminated in the release of a CD that, according to Dr. Roy, “thrilled listeners”. And thus, Byatikromi was born.

Not in it for money

“We don’t earn anything from the performances,” said Dr. Raychaudhury. “We do ask for a sum that is donated immediately to NGOs working for the poor or marginalised.”

The group members insisted that their greatest reward from music was relaxation.

“We all have highly stressful jobs, and music relaxes us. Not only that, the kind of songs we sing takes us back to our childhood. We get to relive our younger days. We can sense this happens to our audience as well, which gets a respite from day-to-day stress and struggles. That’s the USP of Byatikromi,” Dr. Raychaudhury said.