Comeback man Dinesh Karthik revelling in his role as a finisher 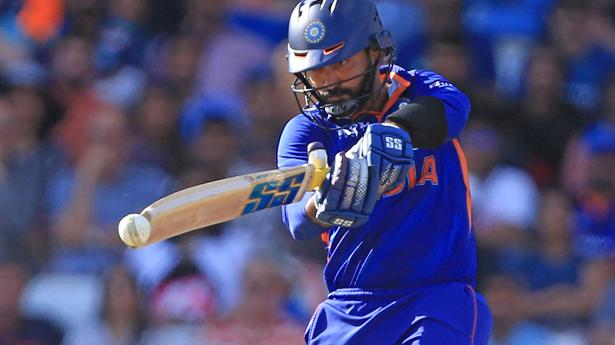 ‘As long as your role is defined clearly, it becomes relatively easier to prepare and focus’

‘As long as your role is defined clearly, it becomes relatively easier to prepare and focus’

At 37, Dinesh Karthik is fit as ever and raring to go following his exploits in the IPL this year that helped him make yet another comeback to the national side in the T20 format recently.

The wicketkeeper batter has been given the role of a finisher in the line-up. He showed what he can do in the recent home series against South Africa with a couple of valuable knocks, including a half-century that helped India level the series in Rajkot.

Despite the challenge of donning a crucial role where he has little time to get his eye in, Karthik is revelling in the task he has been assigned with.

“I think I have enjoyed it so far. The fact that I did so well for RCB has helped me achieve a few important things. It is a journey and I am really enjoying it,” said Karthik here on Friday on the sidelines of an event promoting Evocus, a Black Alkaline water brand.

On a roll: Dinesh Karthik’s half-century during the 4th T20I between India and South Africa at Rajkot helped level the series.
| Photo Credit: BCCI/Sportzpics

“With every new day, there is a different challenge. Some challenges you overcome, and some challenges are harder. So it has been interesting so far,” he added.

In recent matches, he has often been held back in the batting line-up till close to the last handful of overs. On how he handles the pressure of the limited time he gets to make an impact, Karthik said, “be it the State, IPL or national side, as long as your role is defined clearly it becomes relatively easier to prepare and focus. One has to adapt and thrive, and I am really enjoying the challenge.”

Commenting on how hard this comeback was compared to the previous ones, the Tamil Nadu player said, “to be honest, nothing much has changed. Of course, making a comeback when you are 35 plus was never going to be easy. I am thankful to everyone who helped me during that phase. I quietly believed in myself and put in the yards before the IPL, (and) happy things worked well.”

The Hindu Business Line46 mins ago
4