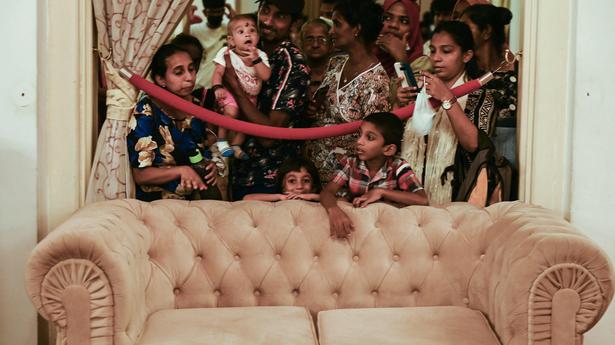 Sri Lanka’s embattled President flew out of his country early on Wednesday, in a probable prelude to his resignation after months of widespread protests over the island nation’s worst-ever economic crisis. Gotabaya Rajapaksa had promised during the weekend to resign on Wednesday and clear the way for a “peaceful transition of power”, after fleeing his official residence in Colombo just before tens of thousands of protesters overran it.

In a joint operation, Punjab Police and the Gujarat Anti-Terrorist Squad (ATS) have seized nearly 75 kg of heroin, estimated to be worth over ₹375 crore, from a container near the Mundra port in Kutch district. The container, which originated from Dubai and was kept at a container freight station outside the port, was searched based on a specific tip-off received from intelligence sources.

Twitter sues Elon Musk to hold him to $44 billion merger

Twitter Inc sued Elon Musk on Tuesday for violating the $44 billion deal to buy the social media platform and asked a Delaware court to order the world’s richest person to complete the merger at the agreed $54.20 per Twitter share, according to a court filing.

Eight candidates in race to be next U.K. Prime Minister

Eight Conservative MPs will vie to become UK prime minister, the party announced Tuesday, with frontrunner Rishi Sunak launching his campaign by saying he would not “demonise” the outgoing Boris Johnson, despite triggering his demise.

Right-wing extremists and supporters of Donald Trump staged the January 6, 2021 assault on the U.S. Capitol after a tweet from the former President seen as a “call to arms,” lawmakers said on Tuesday.

The cosmic cliffs of a stellar nursery, a quintet of galaxies bound in a celestial dance: the James Webb Space Telescope released its next wave of images on July 12, heralding a new era of astronomy. “Every image is a new discovery,” said NASA administrator Bill Nelson. “Each will give humanity a view of the universe that we’ve never seen before.”

The Special Investigation Team (SIT) probing the case of forgery and fabrication of evidence in connection with the 2002 riots has arrested dismissed IPS officer Sanjiv Bhatt, making the third arrest after social activist Teesta Setalvad and former IPS officer R.B. Sreekumar. The SIT is probing allegedly fabricating evidence of conspiracy behind the 2002 Gujarat riots to falsely implicate certain persons including the then Chief Minister Narendra Modi, now Prime Minister.

Centre has no new data on child labour

The Centre does not have any data on child labour in the country and a reason for this is the drying up of budgetary provisions meant for the National Child Labour Project (NCLP) scheme, which was monitoring the problem for about three decades. The Labour Ministry is learnt to have told the Parliament Standing Committee on Labour, headed by veteran Biju Janata Dal (BJD) MP, Bhartruhari Mahtab, that since the NCLP was merged with the Samagra Shiksha Abhiyan in 2016, the Ministry has no records of child labour. The currently available data is of the 2011 Census, which says the country has more than a million child labourers. Last year, the panel had pulled up the Centre for lack of data on migrant workers.

A Delhi court on Tuesday, deferred the hearing to July 14 in the bail plea of Alt News co-founder Mohammed Zubair, in connection with the Delhi Police Special Cell (IFSO) case against him for a 2018 tweet of his. Mr. Zubair had moved a fresh bail application in this case before the court of Additional Sessions Judge Devendra Kumar Jangala after the Chief Metropolitan Magistrate denied him bail on July 2, and remanded him to judicial custody for 14 days.

At above 7%, retail inflation stays stubborn

India’s retail inflation inched lower to 7.01% in June, from May’s 7.04%, but stayed stuck above the 7% mark for the third straight month. Price gains also exceeded the RBI’s upper tolerance limit of 6% for the sixth month. Rural inflation edged up to 7.09%, from 7.08% in May, while urban consumers faced a 6.92% price rise, as per the Consumer Price Index released on Tuesday. Food price inflation, as per the Consumer Food Price Index, eased to 7.75%, from 7.97%, but remained above 8% in urban areas, at 8.04%.

On day 3 of “mass sick leave” at GoFirst called by aircraft technicians, the protest has spread to at least 14 stations. Nearly 110 cabin crew have also reported sick. GoFirst’s technicians in Bengaluru, Pune, Port Blair, Kannur, Nagpur, Chandigarh, Ranchi, Jaipur, Ahmedabad, Goa, Hyderabad and Kolkata have joined the protest. Sources say at most of these stations nearly 90% of technicians are part of the agitation, while in Kolkata nearly 50% have joined.

Next hearing on Gyanvapi case today

The Anjuman Intezamia Masjid Committee on Tuesday concluded its submissions on their Order VII Rule 11 application, challenging the maintainability of the Hindu plaintiffs’ suit in the ongoing Gyanvapi mosque-Kashi Vishwanath Temple civil dispute.

The nominations for this year’s Emmy Awards were announced today virtually. As television fans might have expected, HBO’s Succession has dominated the nominations this time. HBO’s family drama was nominated under a whopping 25 categories, while Apple’s Ted Lasso and HBO’s The White Lotus earned 20 each.

Jasprit Bumrah produced a devastating display of fast bowling on way to career best six-wicket haul to set up India’s 10-wicket hammering of England in the first ODI at the Oval in London on Tuesday. Bumrah ended with envious figures of six for 19 in 7.2 overs as India skittled out England for 110, their lowest against the visitors, after opting to bowl in overcast conditions.

Skipper Savita starred in front of the goal as India defeated Canada 3-2 in the shootout after both teams were tied 1-1 at the end of regulation time in their classification match of the FIH Women’s Hockey World Cup in Spain on Tuesday.

Indian women’s team captain Harmanpreet Kaur climbed one place to 13th while her deputy Smriti Mandhana was placed ninth in the ICC Women’s ODI rankings released on Tuesday. Harmanpreet scored 119 runs at an average of 59.50 and picked three wickets in India’s 3-0 sweep of Sri Lanka in the recently- concluded ODI series. She was also named the Player of the Series for her solid all-round performance.