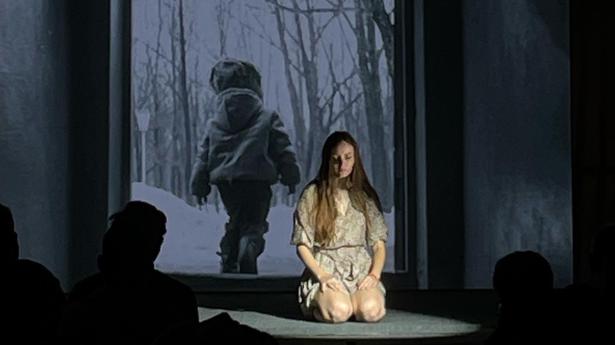 Irena Mohini Mihalkovich introduces ich talks about the introduction of technology in to art in her new latest composition, ‘Runtime Error’ , that uses AI to depict the psyche of a traumatised woman

Irena Mohini Mihalkovich sits in a meditative pose in darkness. Embedded in the silhouette of a room behind her, she is engaged in deep breathing. The audience is encouraged to inhale and exhale with the Indian classical dancer who hails from Belarus.

An AI voice informs the audience about her, a robot who is afflicted with PTSD (Post Traumatic Stress Disorder). Though she tries to go about her daily life, she is unable to do so. The dropping of a saucepan shatters the calmness. The artificially-induced sleep is broken and techno music takes over.

Irena enacted the solo performance at Utopian Dystopia 2022, a digital art work and contemporary art festival that was held in Kochi recently.

The psyche of a woman

Based on the psyche of a real woman, the tech-based performance, ‘Runtime Error’, uses glitches in technology as symbols of fissures in the inner code of human beings and presents the suppressed traumas of women. Conceptualised by her, the empathetic performance left women in the audience in tears. “They connected with the narration and came up to me after the show,” she says.

The production uses AI-generated voices that simulate real and imaginary characters who criss crossed the life of the heroine. The past comes calling, like her mother cajoling her to get ready for school.

“Our thoughts are based on what we saw and heard as a child,” says Irena. As the performance unfolds, the interiors of the room take shape. The woman explores the falling rain outside, but is interrupted constantly by the ringing cell phone. A recorded message of a subscriber not available, triggers a panic attack and the woman begins to cry fearing abandonment.

In a loose garb, of one worn in a sanatorium, she begins to dance, her hands getting entangled with the clothes. Irena explains the voice simulations, “Most are internalised voices of our parents and other adults, who turn into our inner critics. They are fragments of neural connections built in the past, when our “inner code” was written in childhood.”

A higher voice, directs the dancer to look within. Irena refers to popular philosophical entertainer Alan Watts as the “higher voice.” The dancer then begins a journey into her inner self to heal the abuse she suffered as a girl. But every time she reaches the sore point there’s runtime error. She begins self-hypnosis and slowly learns to accept her condition and love herself. The dance ends with the idea of healing.

Technology allowed Irena to distance herself from the subject and transmit real human sufferings into the idea of a computer programme. The visual and sound design enhanced the emotional transitions the character undergoes, from self-destruction to striving for transcendence and liberation.

According to her, dance is divided into those who watch and practise it for entertainment and others who see it as a form of spirituality, prayer and ceremony.

“Though tech reality is just a domain for dance, it can preserve its organic essence,” says Irena, who first experimented with contemporary theatre and Indian classical dance in 2018 and staged a performance at the Kochi Muziris Biennale. Her first video work, ‘The Shadow and Arrows of Love’, was created in 2020.

Irena came to study Bharatanatyam and Mohiniattam to Kerala Kalamandalam in 2013, on an ICCR scholarship. She stayed for a large part of her nine years at Cheruthurthy, where she reveled in the rural life and moved to Kochi in February 2022.

Though her strongest artistic nourishment comes from her childhood spent with her grandmother in Sumy, Ukraine, Irena is captivated by India’s strong storytelling, dance and theatre culture.

Currently she is preparing for her Master’s degree, Choremundus, in dance and other movements (rituals, martial arts, games and physical theatre), offered by European Universities, She resides in Fort Kochi and teaches Yoga and dance online.