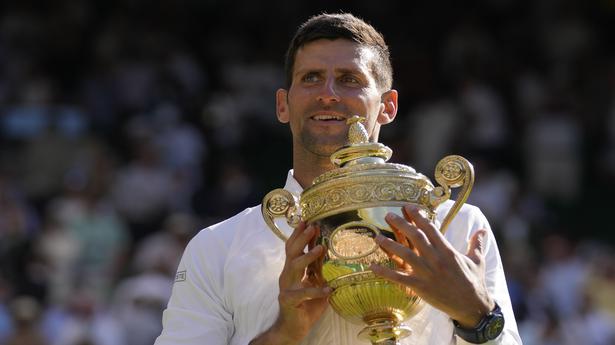 Japan’s governing party and its coalition partner scored a major victory in a parliamentary election Sunday imbued with meaning after the assassination of former Prime Minister Shinzo Abe amid uncertainty about how his loss may affect party unity.

Union Environment Minister Bhupendra Yadav and Congress spokesperson Jairam Ramesh on Sunday engaged in war of words on Twitter on provisions of the Forest (Conservation) Rules, 2022. Mr. Ramesh, a former Union Environment Minister, alleged that the latest version of rules, updated last month, allowed forest land to be diverted to industry without settling questions of the rights of forest dwellers and tribals who resided on those lands.

Novak Djokovic won a seventh Wimbledon title and 21st Grand Slam crown on Sunday with a four-set triumph over Nick Kyrgios, whose challenge fizzled out after a blistering start. Top seed Djokovic won 4-6, 6-3, 6-4, 7-6 (7/3) to equal Pete Sampras’s mark of seven titles at the All England Club and move within one of the men’s record of eight held by Roger Federer.

Political parties in Sri Lanka are scrambling to form an all-party government, a day after President Gotabaya Rajapaksa and Prime Minister Ranil Wickremesinghe pledged to resign in the wake of a historic citizens’ protest. Sri Lankans are living through a harrowing economic collapse, where anti-government protests persisted for three months over the government’s failure to address or arrest the long-simmering crisis.

Hopes of finding those missing in the Amarnath flash floods alive are fading by the hour even as the rescuers are making last-ditch efforts to look for any survivor and the Army has pressed heavy machinery into service to restore the track to the holy cave shrine in the south Kashmir Himalayas, officials said on Sunday.

The Maharashtra Legislature Secretary has issued show-cause notices to 53 of the total 55 Shiv Sena MLAs in the State — 39 members of the faction led by Chief Minister Eknath Shinde and 14 of former Chief Minister Uddhav Thackeray’s group.

Goa Congress to probe Lobo and Kamat for ‘engineering defections’

The Goa Congress is headed for a major split engineered by its senior leaders Michael Lobo and former Chief Minister Digambar Kamat in co-ordination with the ruling Bharatiya Janata Party (BJP). Amid frenzied speculation since Saturday of a number of Goa Congress MLAs defecting en masse to the ruling BJP, Goa desk in-charge Dinesh Gundu Rao, in a late evening press conference on Sunday said that Mr. Lobo, the MLA from Calangute, had been removed from his post of Leader of Opposition in Goa Legislative Assembly while Mr. Kamat would be probed for anti-party activities by hobnobbing with the BJP.

The Army Aviation Corps is in the process of a major augmentation of its fire power with the induction of the indigenous Light Combat Helicopter (LCH) underway, and Apache attack helicopters from 2024 onwards. However, its fleet of ageing Cheetah and Chetak helicopters, which are a lifeline for high altitude areas, are in dire need of replacement. Of the 190 Cheetahs and Chetaks in service, around 134 helicopters or over 70% of them are over 30 years old.

Marginal increase in paddy sowing, yet 24% less than last year

The area sown with paddy rose marginally from that of the previous week, but was 23.95% less than in the corresponding period of last year, according to data collected by the Crop Division of the Union Agriculture Ministry till July 8. The difference in the area coverage from the 2021 figure is 22.75 lakh hectares. Sowing of pulses such as black gram and yellow split pigeon pea has decreased, while the cultivation of green gram (moong dal) has increased by 37.47% and other pulses by 135.12%.

Two years after 20 soldiers were killed in violent clashes with the Chinese army in Ladakh’s Galwan, the Indian Army has for the first time set up a field dressing station (FDS) in Galwan that, among other capabilities, will provide treatment for gunshot wounds at an altitude of over 14,000 feet.

Start-ups in India brace for ‘long and bitter winter’

With funding starting to dry up due to global macro-economic factors, the startup ecosystem in India is bracing itself for a “long and bitter winter” and potential mass lay-offs in the next 12-18 months, particularly in sectors such as ed-tech and gaming that got a significant push during the pandemic, according to experts.

To bolster measurement of air pollution in rural India, the Indian Institute of Technology-Kanpur, is embarking on a $2.5 million project (₹19 crore) to install nearly 1,400 sensors in rural blocks of Uttar Pradesh and Bihar. The three-year pilot project is expected to pave the way for a national network of air quality sensors in rural India

British Indian former Cabinet minister Rishi Sunak maintained his lead as the race to replace Boris Johnson as Conservative Party leader and next U.K. Prime Minister widened on July 10 with a total of nine candidates in the fray, with Trade Minister Penny Mordaunt emerging as an early second favourite.

China and Pakistan on Sunday began four-day naval exercises off the coast of Shanghai, involving Pakistan’s most advanced China-built frigate and paving the way for closer security cooperation between the two countries in the Indian Ocean.

The city of Shanghai has discovered a COVID-19 case involving a new subvariant Omicron BA.5.2.1, an official told a briefing on Sunday, signalling the complications China faces to keep up with new mutations as it pursues its “zero-COVID” policy.

Suryakumar Yadav gave a 360 degree masterclass enroute to a special hundred but England pulled off a consolatory 17-run win over India in the third T20 International in Nottingham on Sunday. Dawid Malan made a sublime 77 off 39 balls as England put India’s second string attack to sword to finish with a mammoth 215 for seven. India sealed the three-match series 2-1, having won in Southampton and Birmingham. India were on the backfoot at the start of the run chase, struggling to 31 for three in five overs.

Charles Leclerc revived his Formula One title challenge by holding on to win the Austrian Grand Prix on Sunday for a third victory of the season, while his Ferrari teammate Carlos Sainz’s hopes of a second-place finish ended when his engine blew as he was about to attack Max Verstappen’s Red Bull.