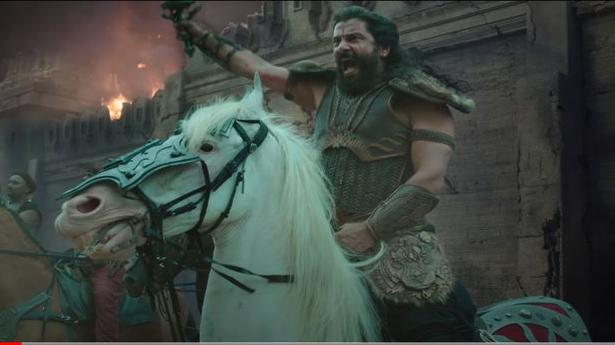 The first of a two-part series, the film is slated to hit the big screens on September 30

The first of a two-part series, the film is slated to hit the big screens on September 30

The one-minute teaser video promises a grand retelling of the events that led to the Chola dynasty becoming a powerful empire in the Southern subcontinent in the 10th century. The video also shows glimpses of Vikram as Aditya Karikalan, Karthi as Vanthiyathevan, Aishwarya Rai Bachchan as Queen Nandini, Trisha as Kundavai, and Jayam Ravi as Arunmozhi Varman.

The technical crew boasts of several A-listers such as AR Rahman for music, Sreekar Prasad for editing, Ravi Varman for cinematography, Thotta Tharani for production design, Jeyamohan for dialogues, Eka Lakhani for costumes, Vikram Gaikwad for makeup, master Brinda for choreography and so on.

Based on Kalki Krishnamurthy’s popular novel on the life of Raja Raja Chozhan, Ponniyin Selvan: Part One has a screenplay written by Mani Ratnam, Jeyamohan and Kumaravel. The film will be the first of a two=part film series.

The story is set in the 10th century during a tumultuous time in the Chola Empire when the power struggle between different branches of the ruling family caused violent rifts between the potential successors to the reigning emperor. The movie is touted to be an adventure epic where brave soldiers, cunning spies and evil schemers all try to win the empire for themselves, and a civil war becomes imminent until the scores can be settled.

All this political and military turmoil leads to the Cholas becoming the most prosperous and powerful empire on the continent and one of the most successful and long reigning in history. PS-1 marks the beginning of the Golden Era.

Produced by Madras Talkies in association with Lyca Productions, Ponniyin Selvan: Part One is slated to hit the big screens on September 30