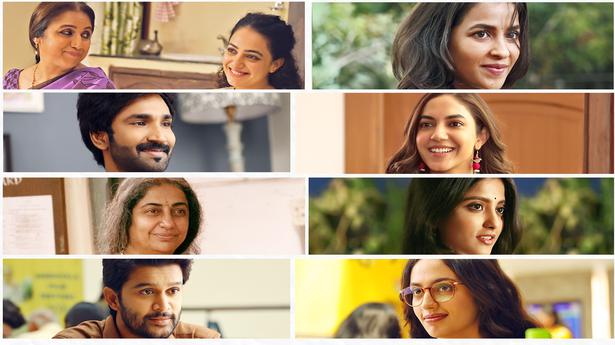 Nagesh Kukunoor’s adaptation of ‘Modern Love’ is an endearing and flavourful celebration of his hometown, Hyderabad

Nagesh Kukunoor’s adaptation of ‘Modern Love’ is an endearing and flavourful celebration of his hometown, Hyderabad

The predominant perception of Hyderabad, for outsiders, has to do with the city’s fascination for biryani, haleem and Irani chai, the Charminar, the IT hub, and new landmarks like the cable bridge, and of course, the Telugu film industry that proudly dishes out masala-laced films. The six stories of Modern Love Hyderabad weave a few of these elements into their narratives. The stories that are a part of the Amazon Prime Video anthology series also discuss old Telugu comedies directed by Jandhyala, the current popularity of stand-up comedy shows and contrasts them with weepy, regressive television soaps. Showrunner Nagesh Kukunoor, who has adapted the stories from the New York Times columns along with Bahaish Kapoor, makes most of the stories appear rooted in the city.

Revathy and Nithya Menen in ‘My Unlikely Pandemic Dream Partner’

The typical Hyderabadi story among the lot is My Unlikely Pandemic Dream Partner directed by Kukunoor, starring Revathy and Nithya Menen. The two winsome women are terrific as on-screen mother and daughter. Revathy and Nithya can convey volumes through their silences and also make us reach out to a plate of food as the story gradually mends and strengthens their bond through food. The nod to Hyderabadi cuisine is in the form of Khatti dal, Ambada chicken, Ande ke lauz, Bagara baingan… the list is too long. Noori (Nithya), when asked by Vinay (Pradeep Rudra) about her new-found glow, attributes it to the nawabi feast. The story broaches how being a stickler to caste and community norms has soured relationships. The Old City setting paves way for the use of Hyderabadi lingo like baigan ke baataan (if only the poor brinjal knew why it always gets the rough end in the lingo). In this Muslim home, winds of change happen delicately when one character admits to another about being unable to wrap her head around modern relationships.

Father of the bride Ulka Gupta in ‘That Rustle in the Bushes’

Even if the stories of Modern Love Hyderabad are about boy-meets-girl relationships, the undercurrent is about re-strengthening familial ties — between father and daughter, for instance. In director Devika Bahadhunam’s About That Rustle in the Bushes, we get an idea of what makes the father overprotective about his daughter. Rather than being judgmental, the simple story brings out the father’s guilt and wish to see his daughter happy. V K Naresh steals the show effortlessly and Ulka Gupta is effective. Abijieet Duddala and Malvika Nair in ‘What Clown Wrote This Script!’

Another dating story that is also about wanting a shift in the entertainment scene in Hyderabad is director Uday Gurrala’s What Clown Wrote This Script! featuring Malvika Nair as a stand-up comic and Abijeet Duddala as a producer who wants to explore the OTT space than plod on with television soaps. The Jandhyala film festival is a delightful Telugu touch to this meet-cute story in the workspace. The stand-up comic bits are not exactly laugh aloud but get it right in their observations about typical young Telugu men. It would have been interesting had Malvika’s character elaborated on the typical Telugu woman as well. Komalee Prasad in ‘Finding your Penguin’

The only dating story that veers into new territory, unafraid to falter, is director Venkatesh Maha’s Finding your Penguin. It comes across as a bizarre idea when the female protagonist, played by Komalee Prasad, compares the men she dates to animals and birds, just because she is a microbiologist. Some portions seem so out of the box, they require a suspension of disbelief. There are laugh-aloud moments as well — when the female lead’s friends give their gyaan on relationships and later when she dismisses a guy for being too perfect and boring, like a Telugu film hero! Rag Mayur and Ankith Koyya, among others, are part of this story that also gives us a hint of Vipassana courses near Hyderabad. The board ‘Mahayana meditation’, to those who closely follow Telugu cinema, slide in a reference to Venkatesh Maha’s production house Mahayana Motion Pictures. Aadhi Pinisetty and Ritu Varma in ‘Fuzzy, Purple and Full of Thorns’

Fuzzy, Purple and Full of Thorns directed by Nagesh Kukunoor, featuring Aadhi Pinisetty and Ritu Varma, solely explores relationship issues between a couple. In the late 1990s when Kukunoor wrote and directed Hyderabad Blues, he took a dig at traditional Hyderabad parents whose idea of being ‘modern and broad-minded’ was about letting their son or daughter speak to a prospective bride/groom in the next room. More than two decades later, in a hilarious segment, he shows two sets of parents who appear cool about their respective children being in a live-in relationship, but their minds’ voices underline the necessity of an immediate wedding. Aadhi and Ritu are a good fit for this slice-of-life drama and make it enjoyable. The purple heels and coffee maker are darn good supporting characters.

Peace with the past Suhasini Maniratnam and child actor Advitej Reddy in ‘Why Did She Leave Me There?’

In all these stories, there are no stark grey characters and mostly endearing people who are left to iron out niggling issues.

Even in the story of the grandmother and grandson that goes back and forth between a slum, an orphanage and a spotlessly clean office space, the mood is sombre enough to tug at our heartstrings but never too bleak. Why Did She Leave Me There? featuring Suhasini Maniratnam, Naresh Agastya and Krishna Manjusha could have been set in any city, but works in the Hyderabad context as well. The beats are extremely predictable and yet, they can make our eyes well up. Suhasini’s performance is no surprise, but Naresh Agastya also stoically makes his presence felt as the CEO/motivational speaker who needs to make peace with his past.

Modern Love Hyderabad is a warm, fuzzy series that loves happy endings and good music. M M Keeravani’s theme and the background score by Smaran Sai stand out. A word of praise is also due to the large technical team.