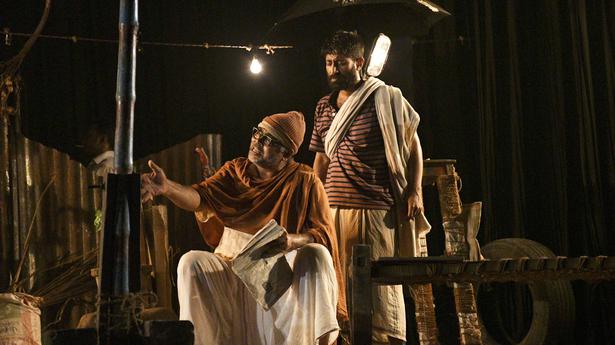 
This week, Kamani auditorium comes alive with four plays that won the 15th Mahindra Excellence in Theatre Awards for 2020 but could not be staged because of the pandemic. Breaking the myth that Hindi and English plays work in the Capital circuit, the curtain will go up on three plays in Bangla, Assamese and Malayalam.

Directed by Saurav Palodhi,  Ghum Nei revolves around workers living in abysmal conditions. An adaptation of Utpal Dutt’s celebrated play of the same name, it comments on the lack of unity among workers in the unorganised sector. “The play has been on stage since the early seventies but it feels more relevant today as we see the exploitation of delivery boys, cab drivers, who do not have a union.”

Palodhi says it is a pan-India problem. When these boys meet with an accident, they have nobody to go to. “Anytime they could be terminated from their job . .”

, Palodhi hasn’t changed the timeline of the play because he feels the audience will easily identify with the problem. “The truck drivers are sleep deprived because of the nature of their jobs,” he ,” explains and says.   the pandemic affected the theatre form the most. “The online mode doesn’t suit the art form; it needs to be experienced live. With 16 actors at a time on stage and sequences of eating food, our play was among the most COVID-unfriendly,” he laughs, and hopes to reach out to a non-Bengali speaking audience through live subtitles.

The Old Man to be staged at the META theatre fest in Delhi
| Photo Credit: Special Arrangement

Assamese director Sahidul Haque says language is no barrier to put his point across as his play The Old Man is more visual than physical. Inspired by Ernest Hemingway’s   The Old Man and the Sea, Haque has extensively used brown paper to create his imagery of a Brahmaputra like river where the old man goes fishing. “I didn’t want to romanticise the river. The water in our rivers appear brown, particularly during the floods.” ”

The play is about an old man Vodai, who goes 84 days without a catch, and is an embodiment of the worst form of misfortune. Even his young apprentice Rongmon is advised to stay away from him. “One day, Vodai ventures into the river again and puts up a brave fight with a big fish that takes his bait,” narrates Haque. On his way home, the fish is devoured by crabs and shrimps. . Vodai falls into a deep sleep and when he wakes up the following morning, he promises Rongmon, in a surge of hope, that they will fish together again. Haque says Vodai is an embodiment of his farmer father and the apprentice carries his reflection. “ The experiential play tells you to hold on to hope.”

Based on Paul Zacharia’s novelette,  Bhaskara Pattelarum Entey Jeevithavum follows  a Christian migrant labourer from Kerala who is obedient slave of his aggressive, tyrannical landlord, Bhaskara Pattelar. Director Suveeran who had adapted it in the 1990s, has recreated the Malayalam play because the literary text allows “infinite scope for evolution and contemporary interpretation.” The class hierarchies, he says, continue to stifle the society.