Fallacies, family feuds and a two-act play on apologies 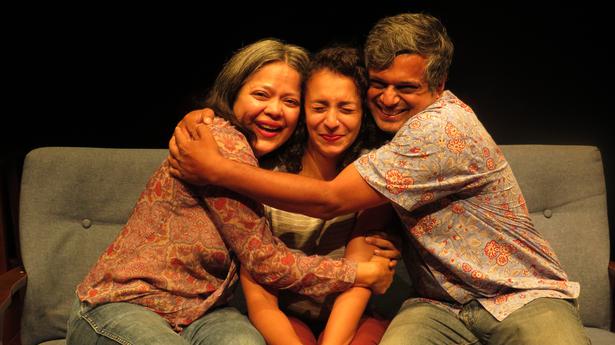 ‘Hold the Mushrooms’ by Binoy Mohan, to be staged by Jagriti Theatre in Bengaluru, is a lighthearted take on family feuds

‘Hold the Mushrooms’ by Binoy Mohan, to be staged by Jagriti Theatre in Bengaluru, is a lighthearted take on family feuds

“In many of the plays I’ve seen, if it is a drama it tends to be very serious, and if it is a comedy it tends to be an all-out laugh riot,” says Binoy Mohan, talking about his debut work, Hold the Mushrooms. “While I enjoy them, I haven’t seen too many plays where heavy topics are dealt with a touch of humour. I wanted to write a play like that.”

Binoy, who started working on this play in 2018, says he wrote the middle of the play first, fleshing out the characters as they evolved from that point in the story. “As it took shape, I was able to depict their back story without the sole use of dialogue. I completed it towards the end of 2019 and took the script to Arundhati Raja of Jagriti Theatre who was interested in directing the play. She suggested some changes which I incorporated,” he says, adding that its production got held up due to the pandemic.

The cast of ‘Hold the Mushrooms’ at rehearsal
| Photo Credit: Special Arrangement

Talking about Hold the Mushrooms, Binoy says he wanted to set it in an environment that was familiar to him. “That’s why it is a story about a family — a father, mother and their daughter. I didn’t want it to be autobiographical or based on my life; it was just my understanding of how these characters would react in a particular situation. Since it was my debut, I wanted to keep the settings familiar, even if the story was not.”

Hold the Mushrooms, is a family-based dramedy that centres around deep-seated biases most people may not even realise they harbour, says the Bengaluru-based, banker-turned-entrepreneur. “One of the characters, though seemingly liberal in outlook, is surprisingly prejudiced when it comes to personal biases. Most people will be able to relate to the play and its characters. Though serious in theme, the humour will keep the audience from feeling overwhelmed.” The cast of ‘Hold the Mushrooms’ at rehearsal
| Photo Credit: Special Arrangement

‘Hold the Mushrooms,’ will be staged on July 8, 9 and 10 at Jagriti Theatre. Tickets available on bookmyshow.com