HomesportEng vs Ind | My mindset doesn’t take me too high, neither low: Hardik Pandya
sport

Eng vs Ind | My mindset doesn’t take me too high, neither low: Hardik Pandya 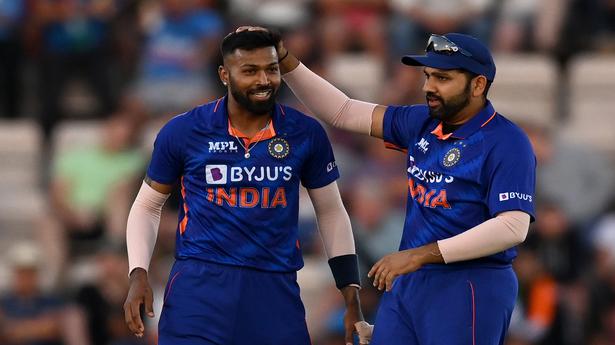 Hardik Pandya, who helped India comfortably defeat England in the first T20 with his all-round performance, said he gives “equal importance to both batting and bowling”

Hardik Pandya, who helped India comfortably defeat England in the first T20 with his all-round performance, said he gives “equal importance to both batting and bowling”

Success and failure have stopped influencing star all rounder Hardik Pandya, who has learnt to live a “neutral life” with a lot of clarity.

Battling an injury-ravaged body, it was not easy for Pandya to return to the game. His career was in jeopardy but he made a grand comeback by leading Gujarat Titans to their maiden IPL title and that too in their debut season.

He also led India against Ireland and on Thursday night shone bright with both bat and ball to script India’s win in the first T20 against England.

Pandya hit a blistering 33-ball 51 to propel India to 198 for eight and then finished with excellent figures of 4/33 to destroy England’s batting. In the process, he became only the fourth player from full member nations to score a fifty and take four wickets in a T20I match.

“Hardwork always pays. I always believe that if you do hardwork with good intention, it pays. My point is how to prepare myself best. One day result will go my side, other day it won’t,” Hardik said at the post-match press conference.

“My mindset doesn’t take me too high, neither low. I have learnt to live neutral in life. Today was a good day, tomorrow can be bad but life moves on, so keep laughing and do your hardwork.”

Pandya said he is always clear about his life and whenever gets off the track, he has a good support system to bring him in line.

“Clarity has always been there in my life. Whenever I felt that there is no clarity in my life, I always take time off and try to identify and rectify it. I don’t like things to do in a hurry. Leave batting and bowling, in general life clarity is important.

“For me my support system is very strong. My family is very important for me. That also bring clarity. When I am little confused there is Krunal, my sister-in-law, my wife is there. Such a strong bonding we share that if I deviate a little they kind of bring me back,” he said.

Test cricket is the ultimate test of a cricketer but Pandya said he is currently not thinking much about playing the traditional format as he wants to focus on white-ball cricket.

With the T20 World Cup to be held in Australia in October-November this year and the next ODI World Cup at home next year, the Indian team is also currently prioritising white-ball cricket over Tests.

“Depending on how and what we are playing because right now this is a white-ball season, all focussed on white-ball. Right now it is better for me to play as many white-ball matches for India,” said Pandya.

“The opportunity in Tests will come. What to play what not to play, time will only tell but it’s simple for me, to play as a 100 per cent cricket in whatever matches I get to play,” he added.

“Right now I am not thinking much about what we will be playing in the future or not. Right now I am focussing on making myself available for as many games for India.

“Talking about today’s performance, obviously it’s always good to perform when actually your team requires. For me it was simple, understanding the situation and what my team requires, just going there and doing what I do.”

Asked about which aspect of his game demands more credit in the win, Pandya said: “I will give equal importance to both (batting and bowling) because that 50 was important as we lost wickets but we kept the momentum going and posted a respectable total. But the bowler will take a little more credit because that spell brought so well in the game and made life difficult for England.”

Seasoned Bhuvneshwar Kumar had bowled a perfect inswinger to get the better of in-form Jos Buttler and Hardik was full of praise for the delivery.

“That was very big wicket, everyone know what Jos (Buttler) can do and he has been someone who is a match-winner on any given day.

“Actually it took a special special ball to get him, the field was set for outswinger, there was no midwicket and then Bhuvi doing what he does best, kind of setting the batsman up and the ball which he delivered was fantastic,” he said.

“We as a team, it is a very confidence booster. Our regular five players are not there, and they will join so the team will get better only. The new guys are expressing themselves. India’s bench strength is increasing and it is seeming like there is a change in culture.”