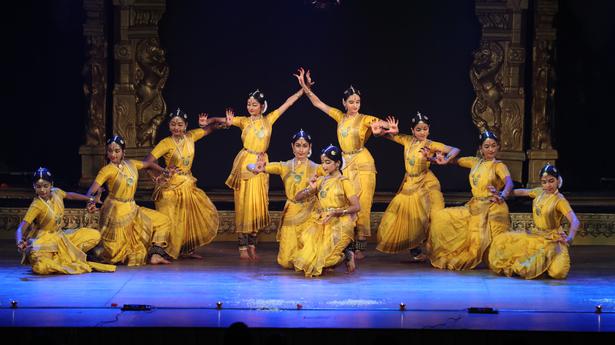 There is an instant connect between the art and the audience when a production seamlessly blends all aesthetic elements. ‘Nava Narasimha’, a thematic dance production, presented by Darshanam Arts at Narada Gana Sabha recently, was one such.

The theme drew as much from spirituality and iconography as folklore and history. Grand sets, lighting design, colourful costume and a populist musical score further enhanced its appeal. There was more in the form of well-choreographed movements that were performed in perfect synchrony. The result, the performance kept the viewers glued to the stage.

Conceptualised and curated by Asha Krishnakumar, the presentation, as the title suggests, focused on the nine shrines of Lord Narasimha, at Ahobilam or Singavezhkundram, one of the 108 Divyadesams located in Kurnool district, Andhra Pradesh. Besides the sthala purana of lord Narasimha vanquishing Hiranyakashipu to protect Prahlada at Ahobilam, various other stories relating to Hanuman, Shiva, Garuda at this shrine unfolded through dance and drama. The Narasimha (Ahobileshwar)-Mahalakshmi (Chenchu Lakshmi) wedding was depicted in detail too. Pillared halls of the temple and the thick forest surrounding it formed a perfect backdrop. Malola Kannan’s engaging narration of the temple history, and his prologue before each performance lent a theatrical effect, besides stringing together the dance sequences.

Eighteen girls almost of the same height and attired in bright-yellow costume, presented the Pushpanjali. The synchrony and precision with which they performed the invocatory piece set the tone for the evening’s performance.

The story of Narasimha and Prahlada as envisaged by Garuda moved at a fast pace but the presentation was a trifle amateurish. So was the Hanuman-Rama sequence. But there was a sudden burst of energy as nine Narasimhas appeared together on the stage, reminiscent of a A.P. Nagarajan movie scene. The students, who depicted the Ugra and Shanta forms of the deity brought out the essence of the contrasting rasas through their coordinated movements.

The episodes leading to the Narasimha-Mahalakshmi marriage, featuring Telugu folk songs of the Chenchu tribe, was a bit lengthy. Though well-conceived, a little pruning would have enhanced the appeal. The dance sequences stood our for their synchrony and neat entries and exits, and interesting group formations. Sheela Unnikrishnan needs to be complimented for her impeccable choreography that featured 75 well-trained students of her Sridevi Nrithyalaya. The students on their part also impressed with their sincerity.

The little boy and girl in traditional attires performing to shlokas from Karavalamba Stotram as a prelude to each episode was an interesting idea. Costumes and props for Narasimha, Garuda, and Hanuman were well-designed. The golden-coloured temple backdrop (sets by Shanmugam) could have been toned down to make it appear more realistic. Lighting by Murugan enhanced the choreography effectively. On the whole, ‘Nava Narasimha’ came across as a well-knit and enjoyable production.