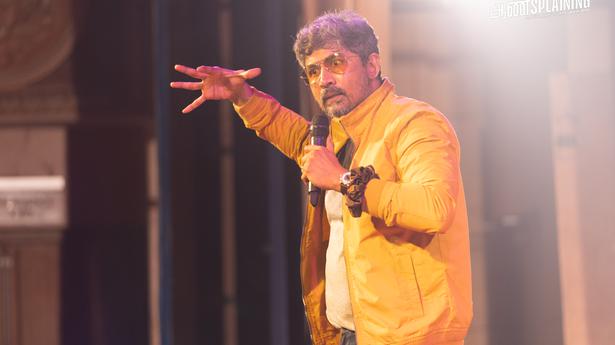 Karthik Kumar does not care what you think of his new show, Aansplaining. The stand up comedian is unfazed if you don’t find his comedy funny. And honestly, there are parts of the show that are not funny at all. Parts where the audience leans forward, desperate for a laugh to break the tension.

That long, awkward pause is exactly what he revels in.

“People are writing me long notes after each show,” he says. “With my earlier shows they would send messages like ‘great’ or ‘that was fun.’ With Aansplaining, I don’t want to know if you think it is great or not. I want to know if it made you think…”

Co-founder of Evam, a performing arts organisation, Karthik has moved from theatre to films to stand up comedy, but despite a life under the spotlight, he finds himself increasingly uncomfortable with the voyeuristic public gaze. Especially after his 13-year marriage to popular RJ and singer Suchitra Ramadurai ended with a flurry of online commentary. Now married to actor Amrutha Srinivasan — the wedding was in December 2021 — he continues to avoid press, choosing instead to bare his soul on stage.

“I am only comfortable if I do it through my art,” he says, adding that it is unexpectedly cathartic to confess into the silence of a breathless, darkened auditorium. In Aanspailing — without giving any spoilers — Karthik manoeuvres through the complexity of relationships, as well as the privileges and challenges that come with being a man.

“COVID-19, for me, was an emotional unravelling of sorts. I had no work, which meant that I lost the one thing I defined myself by. I realised that when I had nothing to do, I felt like I was nothing… That shook me up,” he says thoughtfully.

Karthik adds that these feelings were compounded by a tumultuous long distance relationship he was in at that time. “It was dangerously toxic and my lack of self love came to the fore… My friends tried to rescue me, but I had left my first relationship and I did not want to abandon my second. So I stayed for longer than I should have.”

As a stand up comic who normally plays safe, preferring to skim over deeply personal facets of his past, he visibly struggles with telling some of these stories on stage. “I am uncomfortable as I do that part,” he agrees. “It was difficult to write… that is the part of my show that I thought would be the least appealing to the audience. But, it is what gives me the most powerful response. I am realising now that everyone has been in a toxic relationship, or is in one, or knows someone who is in one…”

Though in 2016, he publicly declared he was giving up on movies, Karthik has recently done a role in R Madhavan’s Rocketry, The Nambi Effect. He is also busy with his directorial feature film Super Senior Heroes, which is in the final stages of post production and scheduled for a release this year. And, he is a part of another film, which will be announced shortly. So much for giving up cinema? “Never say never, right?” he grins.

The problem, Karthik adds, is the limelight. “When performing, one percent of the time, you are in the spotlight, and 99 percent is public gaze, I don’t like being recognised in the mall or taking selfies. I have no hunger for fame. Doing that dance for the audience is very tiring. At 45, I feel like a 75-year-old!”

Instead of focussing on being an entertainer, he says he now feels an earnestness to communicate. “I am more comfortable with myself, I don’t feel like I need validation. I realise that the only truth I am sure of is my personal truth. Now, as I do this show, I realise that people are empathising because so many of them have been in the same place.”

Aansplaining is at Phoenix Market city on July 18, after which it goes to Bengaluru, Coimbatore and Madurai. For details and tickets log onto karthikkumar.live