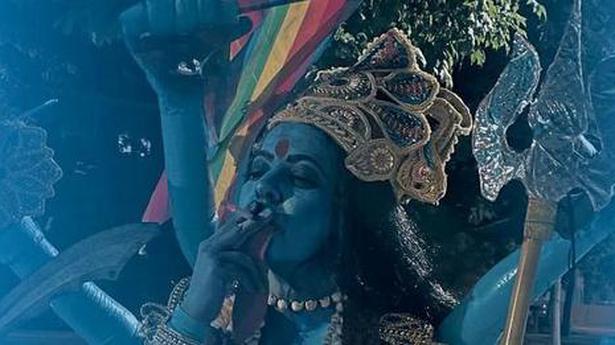 Twitter also has pulled down filmmaker Leena Manimekalai’s tweet about her documentary “Kaali”, in response to a ‘legal demand’.

Twitter also has pulled down filmmaker Leena Manimekalai’s tweet about her documentary “Kaali”, in response to a ‘legal demand’.

The Aga Khan Museum in Toronto has said it “deeply regrets” causing offence to members of the Hindu and other faith communities and has removed the presentation of the documentary ‘Kaali’, after the Indian mission in Ottawa urged the Canadian authorities to take down all “provocative material” related to the controversial film.

Toronto-based filmmaker Leena Manimekalai shared the poster of her documentary ‘Kaali’ on Twitter on Saturday which shows the goddess smoking and holding an LGBTQ flag in her hand.

The poster led to a social media storm with the hashtag ‘Arrest Leena Manimekalai’, and allegations that the filmmaker had hurt religious sentiments. A member of a group going by the name ‘Gau Mahasabha’ said he had filed a complaint with Delhi Police.

Responding to the uproar on Twitter, the museum said in a statement that it “deeply regrets” that Kaali had “inadvertently caused offence to members of the Hindu and other faith communities.” “Toronto Metropolitan University brought together works from students of diverse ethnic and cultural backgrounds, each student exploring their individual sense of belonging as part of Canadian multiculturalism for the project ‘Under the Tent’, it said on Tuesday.

“Toronto Metropolitan University’s project presentation was hosted once at the Aga Khan Museum on July 2, 2022 in the context of the Museum’s mission to foster intercultural understanding and dialogue through the arts,” it said.

Respect for diverse religious expressions and faith communities forms an integral part of that mission. The presentation is no longer being shown at the Museum, the statement read.

“The Museum deeply regrets that one of the 18 short videos from ‘Under the Tent’ and its accompanying social media post have inadvertently caused offence to members of the Hindu and other faith communities,” it added.

The museum response came after the High Commission of India in Ottawa on Monday said that it had received complaints from leaders of the Hindu community in Canada about the “disrespectful depiction of Hindu Gods” on the poster of the film showcased as part of the ‘Under the Tent’ project at the Aga Khan Museum in Toronto.

“Our Consulate General in Toronto has conveyed these concerns to the organisers of the event. We are also informed that several Hindu groups have approached authorities in Canada to take action,” the statement read.

“We urge the Canadian authorities and the event organisers to withdraw all such provocative material,” it added.

Social media platform Twitter has pulled down filmmaker Leena Manimekalai’s tweet about her documentary “Kaali”, which is currently at the centre of a controversy, in response to “a legal demand”.

In the said tweet posted on July 2, the Toronto-based director had shared the poster of “Kaali”, which depicted the titular goddess smoking and holding an LGBTQ flag.

“This Tweet from @LeenaManimekali has been withheld in India in response to a legal demand,” read a message in place of the original post.

It is unknown when the tweet was taken down by the microblogging site.

Ms. Manimekalai, who was born in Madurai in Tamil Nadu, on Monday said she will continue to use her voice fearlessly till she is alive.

“I have nothing to lose. Till the time I live, I wish to live with a voice that speaks what I believe without fear. If the price for that is my life, it can be given,” Manimekalai wrote in a Twitter post in Tamil in response to an article on the controversy.

“The film is about the events during Kaali’s strolls through the streets of Toronto city one fine evening. If they watch the movie, they will put the hashtag ‘love you Leena Manimekalai’ rather than ‘Arrest Leena Manimekalai’,” she added in reply to another article.

Ms. Manimekalai, who made her feature directorial debut with 2021’s “Maadathy – An Unfairy Tale”, isn’t the first filmmaker to find herself in trouble over religious references.

In 2017, for instance, filmmaker Sanal Kumar Sasidharan courted controversy over the title of his Malayalam film “Sexy Durga”, which explored religious divides in Kerala society. The film was later rechristened “S Durga”.

Last year, Prime Video’s political saga “Tandav” was at the centre of trouble for a scene depicting Lord Shiva in a college theatre programme. The scene was eventually dropped and the streamer issued an unconditional apology.

‘Kaali’ is yet to be shown to Indian audiences.