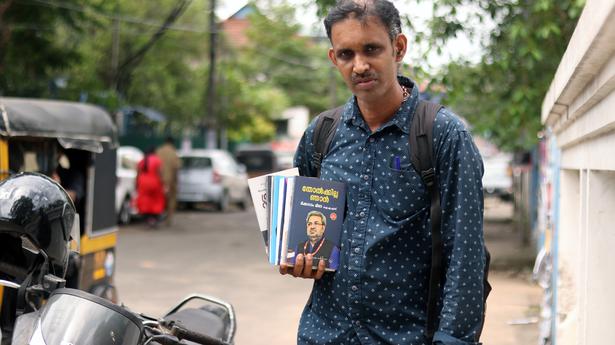 Dileep’s customers are mostly policemen and government employees in Thiruvananthapuram

Dileep’s customers are mostly policemen and government employees in Thiruvananthapuram

There is a buzz around a sightly built man on a motorcycle at the State Armed Police (SAP) campus at Peroorkada in Thiruvananthapuram. Conversations are animated and after an hour or two, each of the policemen leaves with a pile of books in hand while the vendor of stories travels to his next destination.

Jayakumar SS, a retired policeman, recounts that he met Dileep S in 1998 when he was a police constable at the SAP camp. “Dileep used to come on foot with a collection of the latest books. For more than 23 years, he has been selling books of all genres on our campus. By now, he knows the preferences of each of his customers and we have come to rely on his recommendations.”

For 42-year-old Dileep, son of a rubber tapper from Kuttichal, 28 km from Thiruvananthapuram, selling books is a vocation and an extension of his love for reading and books. “Vidhyadharan Vasudevan, an uncle of mine, was an avid reader. He influenced me to take up reading. I followed in the footsteps of a friend and took up selling books at the age of 19 to help my family meet ends. Although he stopped, I continued with my sales,” he says.

Dileep S, a resident of Kuttichal, travels in and around Thiruvananthapuram to sell books
| Photo Credit: Sreejith R Kumar

Initially, Dileep used to travel by bus from Kuttichal to visit city-based publishers and purchase their books. “I bought books from Premier, a sales agency, which offered a 40% discount. I was able to earn a reasonable profit from sales. In those days, there were many publishers in the capital city — Premier, Universal, Akshara, Computech and Prashanti. Many shut shop as big publishers entered the market and reading habits changed,” he says.

At present, he buys books from a couple of leading publishers with outlets in the city. His USP is that he brings the books to his customers’ doorstep.

Dileep’s biggest customers are policemen. Many of them pay for the books in instalments. “Dileep is like family now. Thanks to him, I became a good reader and a collector of good books, which I consider as my biggest savings,” says Jayakumar.

Dileep asserts that many policemen are voracious readers and, as a result, “I was able to widen my reading and knowledge of books. For instance, once, Sivaprasad, a policeman at the camp, requested me to get him the translation of VS Khandekar’s Jnanapith award-winning Marathi novel, Yayati. In that way, I also end up reading some of those books.”

In the nineties and noughties, there were about 3,000 policemen training in the camps in the city. Eventually, the Kerala Armed Police camp was shifted to Adoor.

Word-of-mouth publicity helped Dileep gain customers. He recalls that until five or six years ago, he was allowed to enter government offices and schools where he had many buyers among the staff. Over the years, Dileep was able to gain their trust in his recommendations of authors. “Readers are a diverse lot. Some are eclectic readers while some have distinctive choices, such as thrillers, novels, short stories, travelogues, biographies, classics… Although online sellers have made a huge dent in my sales, many customers continue to patronise me,” he says.

His clients include nurses, employees in government departments and so on but a large percentage of his customers remain policemen. “During the pandemic, the demand for books went up. Now, people have gone back to their busy lifestyles,” he adds.

Four years ago, Dileep managed to buy five cents of land in his home town and set up a lending library, Nirmala Lending Library, in his late mother’s name. His collection of around 4,000 books is now housed there. He admits that there aren’t as many readers as he would have wished. But he is optimistic that once the pandemic fears are put to rest, the library will attract more readers.

Inflation and the rise in the price of petrol have cut his profits. “Moreover, publishers have cut down the window for full payment. Earlier, we had to make a nominal down payment and pay the rest within six months. Now, that time has been reduced to 45 days. That has hit me hard as customers buy books on instalments. It used to work to our benefit,” he explains.

In addition, he feels that security concerns in many offices have been a hurdle for salespeople like him as they are not allowed inside offices.

The father of two has not let diminished profits or dwindling customers reduce his love for books and reading. “Margins are less now. But I have a loyal clientele. Moreover, bookshops in the city and leading publishers trust me. I get a list of books that will be released and I get them pre-orders for new books or reprints. Books have been bread and butter for me and that will continue,” says Dileep.