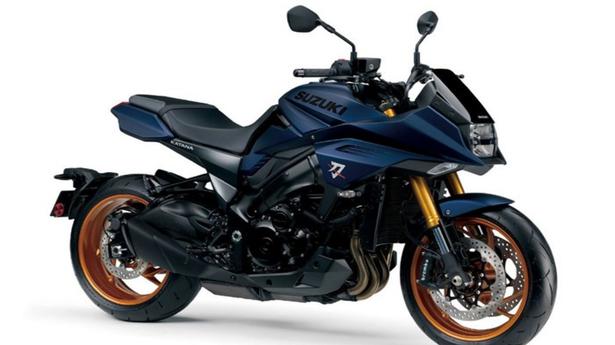 
Suzuki India has teased the launch of the Katana litre-class motorcycle, and it should hit showrooms in India pretty soon.

Suzuki India’s ‘big bike’ portfolio currently comprises the 650cc V-Strom 650XT adventure bike, and the legendary 1,340cc Hayabusa. To plug the massive gap between those two, the brand will introduce the Katana — a litre-class semi-faired motorcycle styled after the original launched in 1981.

Named after a long, single-edged sword used by Samurai warriors, the modern-day Katana is powered by a 999cc inline four-cylinder engine that’s derived from the iconic K5 GSX-R1000. This is also the same motor that currently does duty in the GSX-S1000. For the 2022 model year, this engine has been tweaked with new camshafts and valve springs, and received updates to the airbox and exhaust system.

Other changes for 2022 include a new ride-by-wire system and smaller 40mm electronic throttle bodies. The electronics suite includes traction control, a bi-directional quickshifter and three throttle maps — all of which offer full power, but differ in delivery.

Equipment levels are not fantastic, but they aren’t shoddy either. The suspension is manually adjustable, with a fully-adjustable USD fork and a monoshock that can be tweaked for preload and rebound damping, while the brakes are radial Brembo calipers biting on 310mm discs. The Katana gets an LCD display that is more basic than the TFT units seen on most new bikes and lacks Bluetooth connectivity.

Going by prices overseas, the Katana should be priced around the ₹ 12 lakh mark in India, which would make the Kawasaki Ninja 1000SX and the BMW F 900 XR its closest competition.

The Hindu Business Line14 mins ago
4