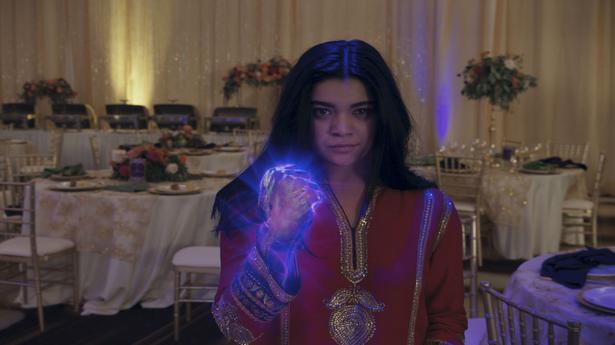 The executive producer of the MCU series, says the makers were looking to maintain quirkiness and at the same time show Kamala as a character who could potentially be side-by-side with the Avengers

The executive producer of the MCU series, says the makers were looking to maintain quirkiness and at the same time show Kamala as a character who could potentially be side-by-side with the Avengers

Though Kamala (Iman Vellani) and Kamran (Rish Shah) vote for Baazigar over Dilwale Dulhania Le Jayenge ( DDLJ) as the best Shah Rukh Khan film in the charming MCU show, Ms Marvel, executive producer Sana Amanat, begs to differ.  “I love DDLJ!” she says with a laugh. “It is one of my favourites.”

The American-Pakistani Amanat is a comic book editor and the Director of Content and Character Development at Marvel. She is co- creator of Ms Marvel, featuring Marvel’s first female Muslim superhero. The comic, which was launched in 2014, spent several weeks on The New York Times Bestseller list.

Speaking over a video call from Los Angeles, California, Amanat speaks of the challenges of converting the popular comic into a show. “We wanted to make sure the series could retain the essence, the quirkiness and the fun of the comics and still feel like an MCU show. We needed the show to feel real with real world stakes.”

The aim was to make the show a little bit of everything, the 40-year-old Amanat comments.  “We wanted to try to find a blend, to maintain some of the brightness and vibrancy, and yet at the same time show that Kamala is a character who could potentially be side-by-side with the Avengers. Figuring out that balance was a bit of a challenge, but I think we found it.”

Kamala is like any 16-year-old fangirl, until she isn’t… She is putting final touches on her costume for Avenger Con, still looking for that one statement piece that will give her costume the zing it needs. A package from her grandmother arrives from Pakistan in the nick of time. Though her mum dismisses it as junk, Kamala finds an ancient bangle which she feels completes her outfit.

“The bangle is linked to something from her past that is incredibly important to the story that we are telling about Kamala and her overall journey,” says Amanat. “Ultimately Ms Marvel is a story about identity and what that means in relation to your past, your family and your heritage. That is what we wanted to make sure that we had.”

The bangle was a big part of the comics as well, Amanat says. “It is something that was given down to Kamala from her family. We wanted to make sure that we retained the essence and was amplified by this idea that unlocks these powers within her.”

That was something they wanted in the comics as well, says Amanat. “We wanted to make sure that Kamala’s costume looked a little bit like a shalwar kameez or a churidar pajama and at the same time, felt like something a kid would wear in the States — slightly longer shirt and tights.

Amanat says the costume also feels like something a superhero in the MCU would wear. “While the costume is a little different from anything else that you have seen, we think it looks fun and tough at the same time.”

Apart from all the other pluses, Ms Marvel offers the best South Asian music. “I grew up listening to a lot of desi music. There are so many great artists. South Asian music and South Asian diasporic music is probably some of the best music in the world, and it was just a great platform. The music is a blend, just like Kamala.”

For all who are wondering about Farhan Akhtar’s role in the show, Amanat’s lips continue to be sealed. “He is in it, I cannot say anything else.”