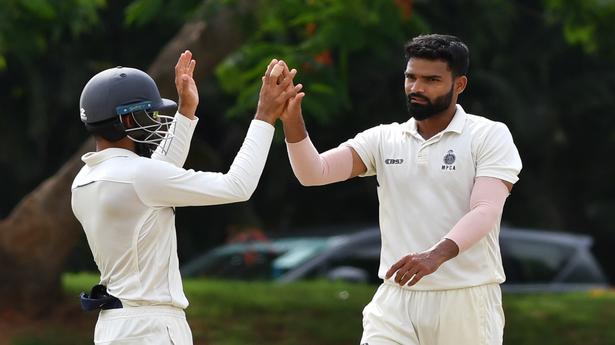 Madhya Pradesh entering finals after 23 years will be facing the 41-time champions Mumbai in Bengaluru on June 22.

Madhya Pradesh entering finals after 23 years will be facing the 41-time champions Mumbai in Bengaluru on June 22.

Domestic giants Mumbai completed the formality of qualifying for the Ranji Trophy final by virtue of first innings lead on the final day of their last-four match against Uttar Pradesh, on Saturday.

Bengal needed 350 runs to win a tough semi-final but left-arm spinner Kumar Kartikeya bowled out an under-pressure team to exactly half of the target to take Madhya Pradesh to final after 23 years.

The 41-time champions, Mumbai thoroughly dominated from the first ball of the game, which ended in a draw, at the Just Cricket Academy ground.

Mumbai had posted 393 in their first innings and then bundled out Uttar Pradesh for a meagre 180, to gain a massive first-innings lead.

When play ended on the fourth day on Friday, Mumbai had piled up a mammoth 449 for 4 in their second essay, courtesy hundreds by Yashasvi Jaiswal and Armaan Jaffer.

At stumps of Day 4, Mumbai took an overall lead of 662 runs, making it amply clear that there was only one result possible from the match.

On Saturday, play began after lunch due to wet out-field and overnight batters Sarfaraz Khan and Shams Mulani continued to torment the UP bowlers.

Both Sarfaraz (59 not out) and Mulani (51 not out) completed their half-centuries, after which both the captains decided to shake hands.

Mumbai posted 533 for 4 in their second essay.

Mumbai will meet Madhya Pradesh in the final, which will be played at the M Chinnaswamy Stadium from June 22.

The final will be a battle between two former Mumbai players Amol Mazumdar and Chandrakant Pandit, who are coaches of Mumbai and MP respectively. P

Kartikeya, who has been impressive in an otherwise disastrous IPL campaign for Mumbai Indians, bowled 32 overs out of the 65.2 overs that Bengal faced to make 175. His final figures read 32-10-67-5 for a match haul of 8 for 128.

It wasn’t the defeat that will hurt Bengal but the manner in which they lost would hurt them the most. It was an abject surrender.

Kartikeya actually played with the opposition batters’ minds and even their top-scoring skipper, Abhimanyu Easwaran (78), looked beaten from the start.

It was evident when Abhishek Raman, who bagged a pair, forgot to take guard on Friday afternoon. On Saturday morning, Anushtup Majumdar suddenly realised that he has forgotten to wear his thigh guard.

It was nervousness as he edged the first delivery without showing any footwork. It was a delivery that he would have left on any other day.

Easwaran seemed too intent to impress the troika of national selectors, present to watch the match, rather than trying to be be counter offensive. An innings that could make him a worthy contender for a spot in the Test team. Easwaran certainly lacks the ability to win tough games.

He quietly accumulated runs but not for once did it seem that he is going for the chase.

Once Kartikeya knocked his off stump back with a delivery that kept a touch low, the writing was on the wall.

Sayan Sekhar Mondal had a match he would like to forget in a hurry.

Bengal added 79 runs to their overnight score of 96 for 4 and with 83 overs set to be bowled, Kartikeya and MP wrapped it up in just 28.2 overs.

“It’s Manoj’s dismissal last evening that was the turning point,” admitted MP coach Chandrakant Pandit, the man who incidentally was skipper when the team last played the finals in the 1998-99 season.

No wonder, the players that impressed the national selectors were Kartikeya and Rajat Patidar.

It was some sight as their teammates curiously watched from the dressing room door seeing chief selector Chetan Sharma speak to the duo.