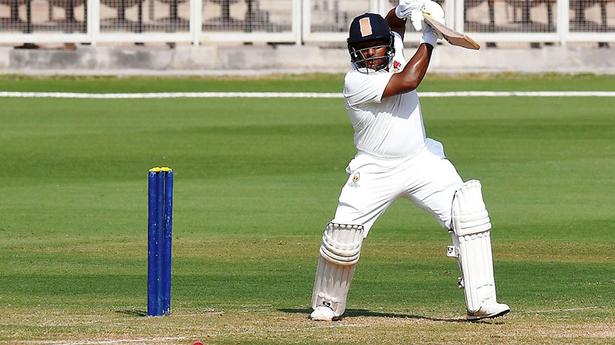 
The writing was on the wall on the penultimate day. Then, overnight heavy rain made the last day’s proceedings of the semifinal between Mumbai and Uttar Pradesh at Just Cricket Academy a mere formality, if not a farce.

Eventually, only 16 overs were bowled, with UP part-timers rolling their arm over. The moment Shams Mulani joined Sarfaraz Khan in the half-century club, Mumbai declared its second essay at 533 for four. With less than half an hour remaining for tea, the break was called and the teams shook hands.

Despite the disappointing outing over the last five days, Uttar Pradesh had plenty to cherish from a season where it started as underdog. Mumbai, on the other hand, will go into Wednesday’s final at the M. Chinnaswamy Stadium with literally no chink in its armour.

With the part-timers bowling for most of the day, Sarfaraz — in the form of his life — was served dollies aplenty. And the run-machine crossed the 800-run mark for the season with two sizzling hits over mid-wicket.

Mulani, who was cautious against Prince Yadav initially, cut and pulled the medium-pacer for fours off successive balls to hasten his fifty that ended proceedings.

The morning session was washed out owing to multiple soggy patches in the outfield. Only after the scheduled lunch did the match officials, in consultation with the captains, decide to start at 1.15 p.m.

Had the game started on time, Mumbai — just as on the fourth morning of the quarterfinal against Uttarakhand last week — may have declared at its overnight 449 for four, with a lead of 662 runs.

Yashasvi Jaiswal was adjudged Player-of-the-Match for his twin hundreds. Mumbai will be looking forward to repeating their exploits on Wednesday.

Match drawn; Mumbai through to the final on the basis of first innings lead. Player-of-the-Match: Yashasvi Jaiswal.