What to expect from Chennai’s latest pubs post-lockdown From Royapettah to Velachery, the city has seen a rush of post-pandemic bar launches, flaunting craft cocktails, giant sports screens and inventive menus

From Royapettah to Velachery, the city has seen a rush of post-pandemic bar launches, flaunting craft cocktails, giant sports screens and inventive menus

The Wild Garden Cafe at Amethyst has always been popular for its relaxing oasis of greenery, where customers can eat crepes amid hidden lotus ponds. Now, it is busier than ever before as you can add a glass of wine to your meal, courtesy the recently established Chennai Star Club in an enclosed segment of the main building.

The newly acquired, limited liquor licence means that some parts of the property now have the wherewithal to serve some quintessentially Chennai concoctions, dreamt up by bartender Sakthi Dasan. Consider a drink of white rum, sugarcane juice, and freshly muddled ginger, balanced well enough that the sugarcane refreshes you right before the rum hits. Or heady minty nannari mojitos, watermelon martinis, or Earl Grey tea-based vodkas.

Inside the club, those with membership cards can lean back on 40-year-old wooden furniture and gaze at an impressive reprint of a centuries-old Bourne & Shepherd photograph of the Calcutta Harbour. Or, have the erstwhile Maharaja of Bobbili looming over your shoulder as you enjoy a quiet glass of whisky sour.

The Purple Chameleon in in Phoenix MarketCity, Velachery, meanwhile, is all about bells and whistles. An innocuous door on a regular corridor of the mall leads inwards to a sudden riot of lights and colours. Inside, neon flamingoes jostle for space with equally bright pop culture signage; cocktails come with billows of smoke entrapped in bubbles; and DJs focus on heightening your buzz with their beats. It is a space of excited conversation and raucous laughter — if you want to recline quietly and dissect the finer flavours of a dainty dish, The Purple Chameleon is not for you.

And yet, plenty of thought has gone into the menu: there are 13 signature cocktails. These include the namesake purple chameleon: a heady concoction that uses gin infused with the blue peaflower, popular for its ability to change colour from blue to purple. It comes in a clear round vessel that gushes smoke, balanced gingerly atop a white disk whose rim is alight with colours.

Glitz aside, the idea is to bring in flavour notes of different parts of the country, “which is why each of these cocktails has an ingredient representing a different state. Our black buck cocktail, for instance, features mustard-infused tequila,” explains mixologist Nitin Tiwari. 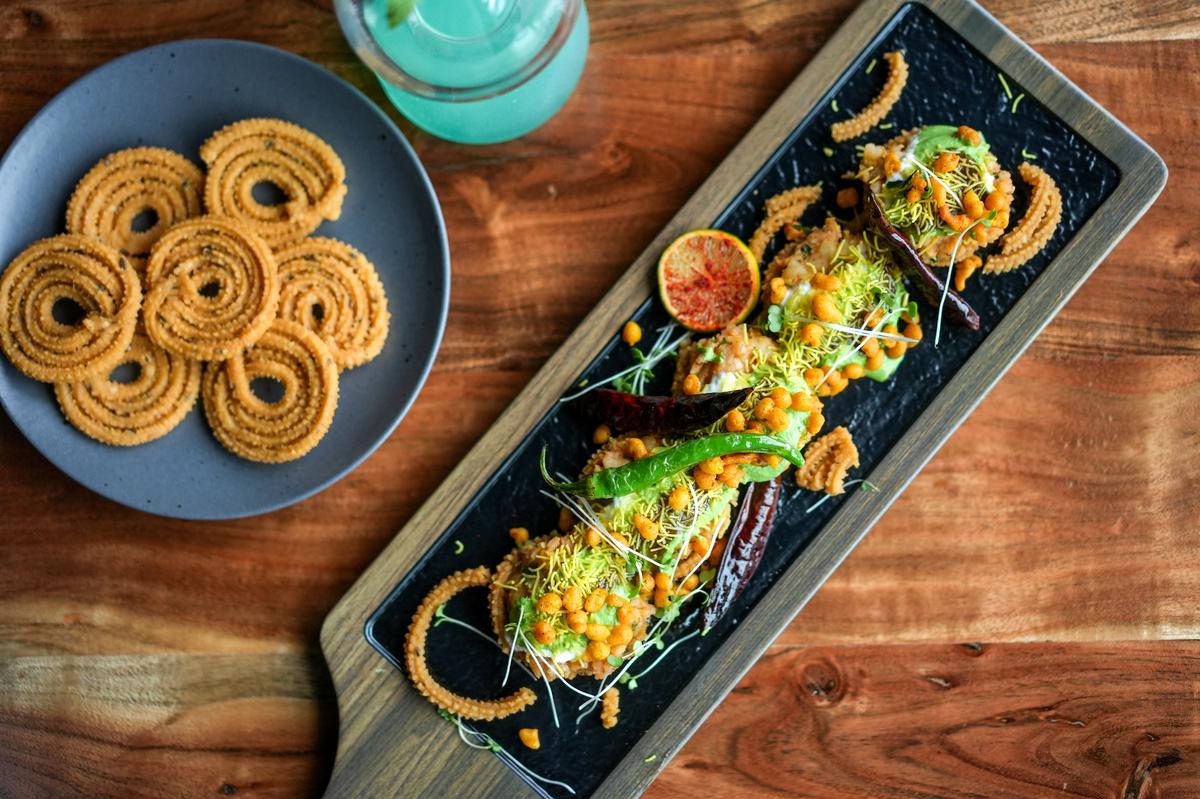 Chakli chaat at The Purple Chameleon

Chef Navin Prasad’s food is playful in a different way, with twists on everything from regional street food to Japanese fried chicken, karaage. A chakli chaat comprises sev, curd and boondi, served on a thick, crunchy chakli or murukku instead of papdi. The base is uncompromisingly strong, the flavours match, it all just — fits. The slightly dry karaage, however, is more batter-crust than chicken, and needs to be rescued by an excellent onion sauce. A pleasant surprise is the til-wali macchi: small chunks of oh-so-soft fish coated in sesame seeds and cooked in the tandoor. The mild flavours are punctuated by sudden kicks of mustard. Desserts, like rum-soaked gulab jamun served in a pool of creamy rabri, are over-zealous with alcohol. Balance is not the strong suit here, but who cares? It’s all good fun anyway. 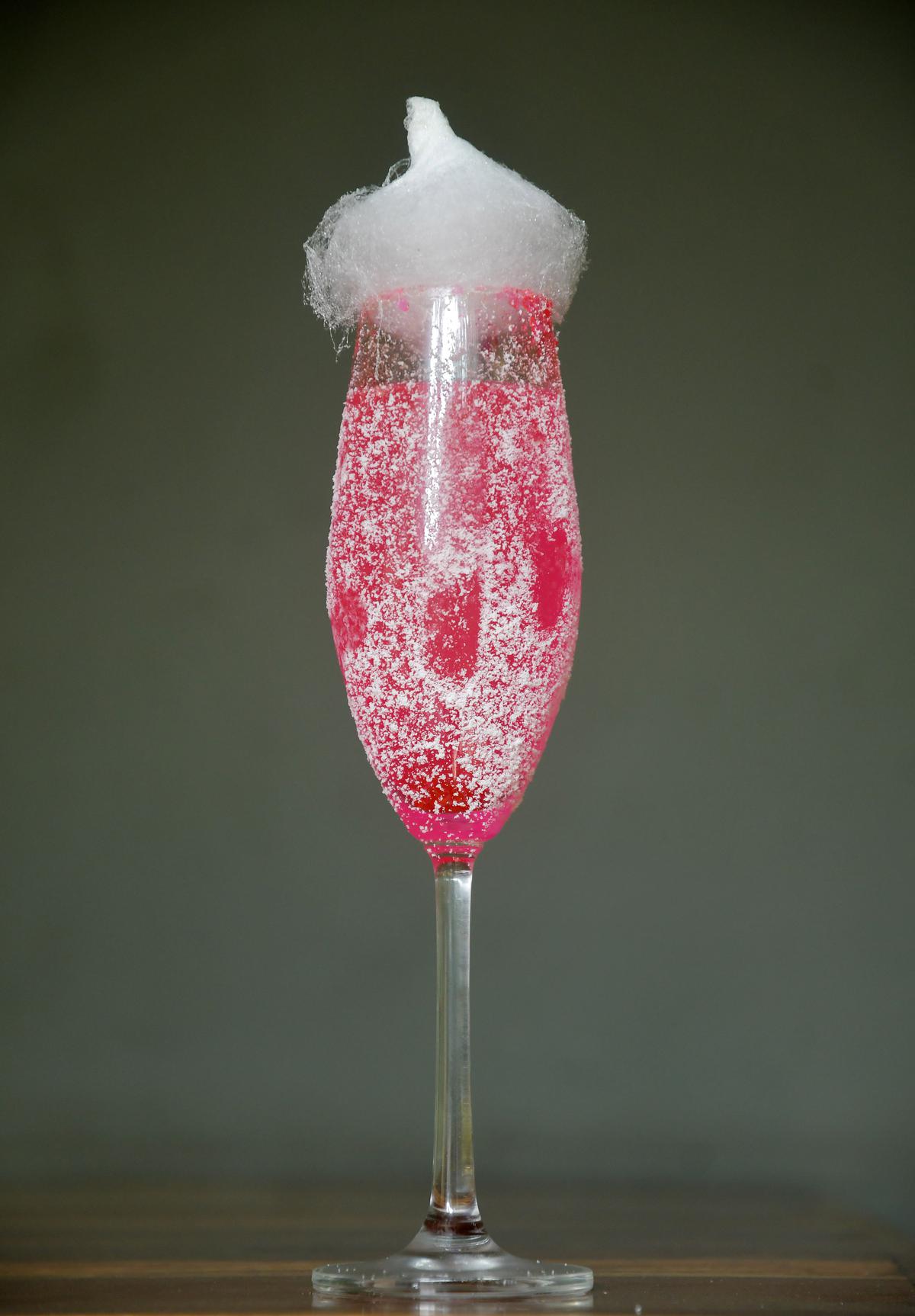 The Void, meanwhile, has quiet relaxation in mind. There is a DJ console, but the sound system has been planned to enables easy conversation. On weeknights especially, the three-storey space is all about sitting back and kicking back.

With a sports bar on the first floor, a live music lounge (that hopes to host classic rock, retro and original indie acts) on the second floor, and a yet-to-open rooftop, The Void is among the latest attempts at bolstering Anna Nagar’s nightlife.

Old-school rock music hits the right spot, cocktails are well-balanced (if a tad underwhelming), and the dinner menu shines with its oh-so-soft pates and kebabs. Try the brain scramble, heady with curry leaf and chillies, and the comfortingly mild Japanese bowl with rice that’s just this side of sticky. “Anna Nagar does not have a separate space dedicated to screening Formula One races, tennis matches and the like. That’s what we want our sports bar to be, while the upper floors are for regular mingling with long communal tables and music gigs,” says co-founder Varun Shreyas.

Nearby in Mogappair, a second-floor lounge called Middle Of NoWhere is just about enjoying your meal. The slick space has quietly, unassumingly been creating its own steady customer base for the past three months, though it began operations for nearly a year. Helmed by city-based Chef Saravanan, Middle Of NoWhere splits its menu into three categories — Everywhere, Somewhere, and Nowhere (except here), based on where you are likely to find the dish.

“For example, you might find pulled pork in a few restaurants, but only here will you find a dish that combines baby potato and baby pork — each cooked separately, but brought together with a Hollandaise sauce that has been cooked in pork fat. It is one of our most popular items,” states the chef, adding, “We have guests who visit Chennai regularly, and come here straight from the airport to dine on this dish before checking in.”

Both food and cocktails are frill-free and tasty, made by a team that clearly knows what it’s doing. Further to its credit, Middle Of NoWhere also has a budget-friendly starter menu, with dishes for ₹79, that are just as well made. NoWhere else can you order a street-style, utterly soft kalaki and pair it with an exuberantly sweet peanut-based cocktail. At the other end of the spectrum is Sekhmet, a three-storey prime property on Chamiers Road. With a glittering bar, murals of the Egyptian goddess of war Sekhment, and 25-foot screen screening sports, movies and DJ sets to 700 guests seated at multiple levels, the space screams “rich and loud” — conversation is not an option.

Sekhmet has found its flock within six days of opening. Weeknights are abuzz and weekends are packed, says owner Ashok Kumar, not the least because of chef Amit Kumar’s deft handling of seafood. His oyster thermidor and chimichurri prawns make for unusual fare, but what he is most proud of is his chukandar ka silbata tikka: a betroot-based dish with a pate’ like consistency. “And my tres leche is a good sweet note to end on,” he adds with a smile.