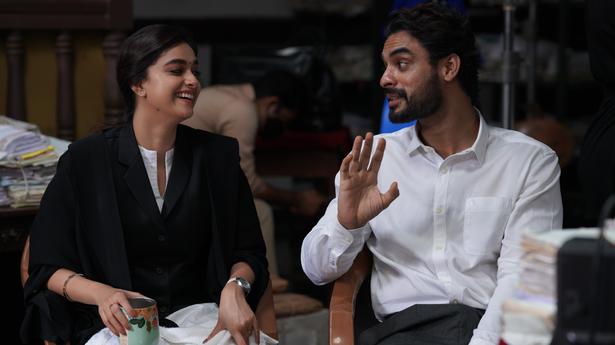 Courtroom dramas, which Malayalam cinema has been churning out in considerable numbers in recent years, often fills one with dread due to the possibilities of the protagonists indulging in long-winded dialogues, which have no place in an actual court. In Vaashi, the judge, exasperated by a shouting match between two advocates, tells them that it is not a news channel discussion, but a courtroom.

The film, directed by Vishnu .G. Raghav, also sticks to the judge’s diktats for most parts, for the courtroom scenes are not really over-the-top. An attempt is made to stick to the purely legal arguments, rather than use the court as a pulpit for delivering a rousing speech. At the centre of the film is an ego clash between newly-appointed public prosecutor Ebin (Tovino Thomas) and defence lawyer Madhavi (Keerthy Suresh). The married couple face a testing time when they end up on either side in a case involving manufactured consent.

Although only a small percentage of incidents involving sexual assault of women in the country are getting registered, there has been much discussion on how laws intended to protect women can possibly be misused. Vaashi, just like the 2019 Hindi film Section 375, also attempts to add to the conversation, with a case involving the alleged rape of a woman by her senior at work, after promising to marry her. The case and its trajectory here too are almost similar to Section 375, but what differentiates the two films is the lawyer couple and their ego clashes.

The script, by the director himself, for the most part alternates between the courtroom and the domestic situation of the two lawyers. Some of the supporting cast, especially Baiju as their close friend from the legal fraternity and Rony David as Ebin’s influential brother-in-law, spice up these parts. But the conflict between the couple gets a somewhat lazy treatment, almost as if the writer did not want to create too much trouble between them. This is evident in how quickly it is resolved, without much of an effort.

It would almost seem that this ego clash part, between two people in the same profession who have to go against each other for personal glory, was created just for the sake of novelty. The case they are dealing with does not have the kind of heft to keep things engaging for two hours. This rather lighter, risk-free approach ensures that the film coasts along comfortably, but never soars above the middling, watchable category. The question of how the handful of cases of misuse of the law gets much hype over the much larger number of unreported, as well as actual cases of assaults of women, also remains.

Vaashi is currently running in theatres