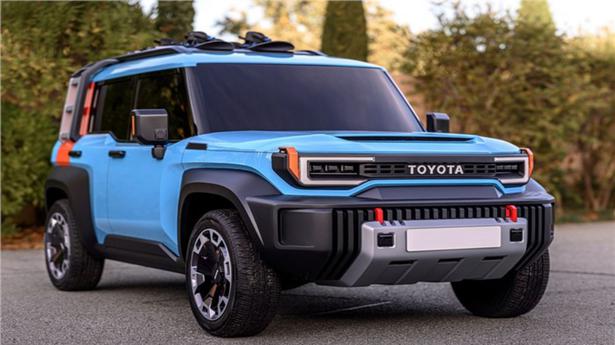 
The Toyota Compact Cruiser EV has won the 2022 Car Design Award for concept vehicles in Milan, Italy, thus prompting Toyota to release more images of the off-road-focused, retro-styled SUV. It competed against other finalists in this category that included the likes of Audi Skysphere, Porsche Mission R, Volvo Concept Recharge, Polestar O2, Lexus Electrified Sport, IED Alpine A4810, among others.

The Compact Cruiser EV has been created by the Toyota Europe Design development centre in Nice, France. It is to be noted that the concept SUV is still not out in flesh, and the life-sized prototype pictured here is only a static clay model, as is evident by the dark tint on the windows.

As for its design, the Compact Cruiser EV clearly takes inspiration from the first generation of Toyota’s legendary Land Cruiser models, while also being reminiscent of the FJ Cruiser from 2006.

Up front, in keeping with the retro theme, the Compact Cruiser EV features a grille with the Toyota lettering in the centre flanked by horizontally arranged LED headlights, which lends it a J80 Land Cruiser-style face. Then, there is the bulky front bumper with a large silver skid plate and protruding, squared-off wheel arches that clearly announces its off-road intent. The bonnet, meanwhile, is flat and features a wide, central air scoop.

In profile, what stands out is the heavy body cladding and prominent kink in the window line. The contrasting colour for the C-pillar and the blacked-out A-pillar also give the roof a floating effect. Meanwhile, the side-mounted ladder and bespoke roof rack further add to the ruggedness of the vehicle. The retro-styled wheels shod in all-terrain tyres are a cool touch.

At the rear, the Compact Cruiser EV gets squarish LED tail-lights, Toyota lettering on the tailgate and, peculiarly, an extension of the roof rack into the tailgate itself. Just like the front, the rear bumper is also bulky and features a prominent silver skid plate.

Toyota has been tight lipped about the technical details of the Compact Cruiser EV so far, but it is expected to be based on an electrified version of Toyota’s TNGA platform that also underpins the larger bZ4x SUV.