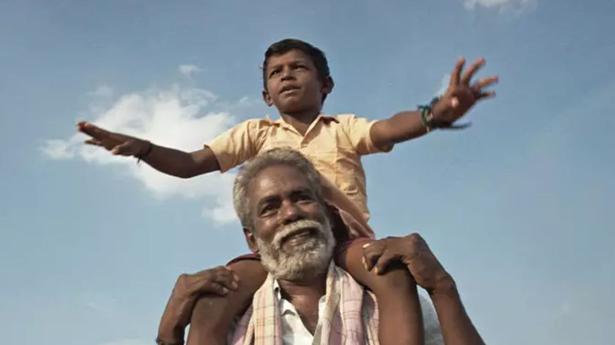 Seththumaan, based on Perumal Murugan’s short stories, explores the social hierarchies and their complexities

Seththumaan, based on Perumal Murugan’s short stories, explores the social hierarchies and their complexities

Seththumaan opens with a set of powerful images. Some seemingly celebratory and some poignant.

Director Thamizh has used these images to perhaps set the stage for the story to unfold. But by themselves, the images have a different story to tell. They are about a Dalit colony hunted down by the dominant caste worried over a mysterious illness that kills their cattle. They suspect the Dalits of killing the cattle for beef. Kumaresan, the grandson in Seththumaan, is the son of a Dalit man killed for eating beef and fighting against caste oppression.

It is now a well-known fact that Seththumaan by Neelam productions is based on Perumal Murugan’s short story Varugari (roasted meat), but the images are from another short story – Maapu Kodukkanunj Saami (Grant us pardon, Sami) — by the author.

Maapu Kodukkanunj Saami was written in 2011 and Varugari in 2012. A decade later, the two short stories, strung together in a different format, are doing the rounds of film festivals and have been released on an OTT platform. “The director was keen to have some scenes from Maapu Kodukkanunj Saami but couldn’t. So, he narrated the story through a set of images at the beginning of the film,” says Perumal.

Through both the short stories, he weaves a compelling tale of continuing discrimination against Dalits through the complex labyrinth of caste and food. If Maapu Kodukkanunj Saami was about the hate crime against Dalits for consumption of beef, Varugari is about the dominant caste members’ craving for pork that leads to the death of Poochi. “Though the stories were written a decade ago, the issue has been in existence from much before. In Varugari, the pig is slaughtered with a hammer, in the film it is killed by injecting a needle. But the changes stopped at that. The stories remain painfully relevant, and they will continue to be as long as caste is a reality,” says Perumal, who has also penned the dialogues for the film.

“The director was earnest when he approached me. He wanted to make a film on a tight budget and thought this short story will work. I was convinced by his sincerity.”

“Thamizh”, says Perumal, “randomly picked up an issue of Kalachuvadu magazine at a book fair and chanced upon this short story. Much discussion also went into the title of the film. “Seththumaan meaning ‘deer in sludge’ was suggested by my student Gopi, who works as a teacher near Namakkal.”

When translated into a visual form, the story underwent some changes. “Portraying on screen a story written by a writer of Perumal Murugan’s calibre was challenging,” says Thamizh.

He read the story several times, prepared a set of questions, and started looking for answers, sometimes in Perumal Murugan’s body of work. “That is how I chose Maapu Kodukkanunj Saami as Poochi’s past. Unlike a short story, a film demands a past for its protagonist and a dream for him or her.”

Poochi’s dream was to get his grandson educated. “It was not there in the story, but such elements are required in a film. I couldn’t think of a better dream for a man like Poochi.”

Rangan’s assertiveness, says Thamizh says, is symbolic of the present-day mood to rebel. “In the short story, Rangan’s character is very limited but in the film, I imagined him as a perfect foil for Poochi, who had to make sacrifices in the larger interest of his grandson’s education.”

But at the core, the film remains faithful to the original story, effectively conveying the horrors of caste and its lived experiences, especially in western Tamil Nadu.

Perumal Murugan says this is the first piece of work to be made into a full-length film. His novel Koolamaathari (published as Seasons of The Palm in English), again on caste discrimination in western Tamil Nadu, is also being adapted into a film. It is again by a new director and a new team. And perhaps another powerful story in Tamil cinema.

The writer is a Chennai-based independent journalist.