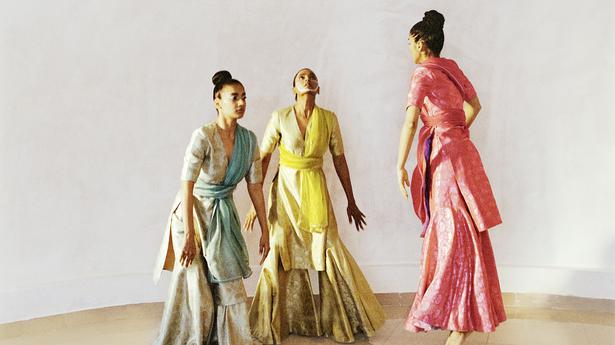 Designer Sanjay Garg on blending eclectic architecture, lost craft and textile traditions in Malligai, his first store in the city and the biggest yet in the country

Designer Sanjay Garg on blending eclectic architecture, lost craft and textile traditions in Malligai, his first store in the city and the biggest yet in the country

“This is the first interview in a washroom,” laughs Sanjay Garg as we take a quick walk through of his 5,400 sq.ft. store, Malligai, ahead of its launch in Chennai. The washroom with its unique vanity unit and old brass tap is a teaser for a beautiful restoration drama.

The charming white bungalow off Cenotaph Road is not just a store showcasing his signature clothes and craft, it is an effusive ode to Raw Mango’s distinct past-update aesthetic. “This has been a dream for many years. I wanted to create a space that evokes multivalent cultural connections. After looking up over 50 old houses in Chennai, we settled for this one,” says Garg.

The designer’s vision for the store evolved over the years. “I guess, it grew with the 14-year-old brand.” He picked up cues from eclectic styles of architecture and craft traditions: “The execution has been overwhelmingly nightmarish.”

The sprawling lawn with a massive single-piece circular iron table and heavy iron chairs reflect the essence of an Art Deco aesthetic that runs through the building, tying various ad-hoc additions into a cohesive space.

“I wanted this store to be a cultural experience,” says Garg, whose Rajasthani roots led him to set up a standalone store in Chennai. “There’s a lot in common. Our cultures are very intense — from the colour palette and spices to the music and even fragrances… Don’t forget the searing heat,” he adds breathlessly. 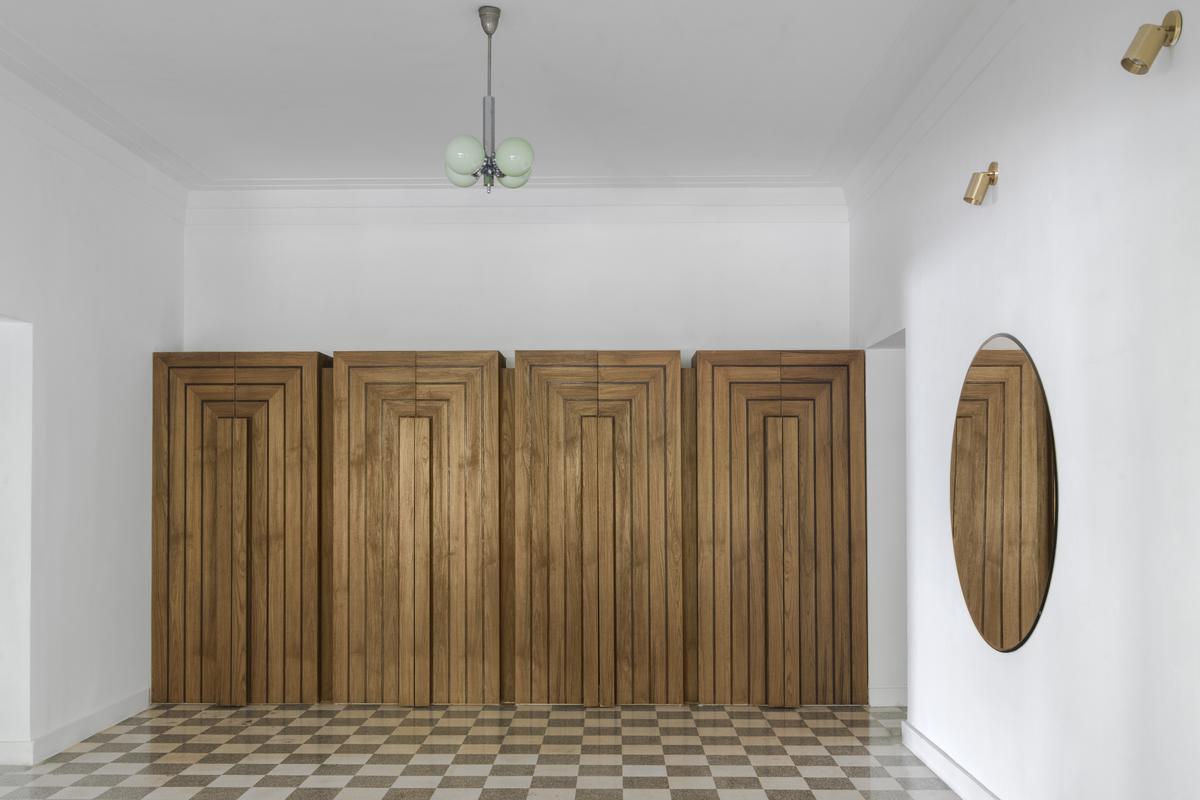 A snapshot of the store
| Photo Credit: SND

Of vitrines and Maharaja busts

It took over eight months for Garg and his team led by visual creative director Adityan Melekalam to reimagine and redesign the interiors. Today, Malligai is a space where the designer’s sensibilities transcend fashion and encompass his love for architecture, interiors and crafts. Every room in the two-level structure sings a different note. While one has understated worn-wood adorning massive cupboards, another has gleaming mirrors. “There’s a lot to open and discover,” says Garg as he talks about the unique display. “What we have been showing in Chennai so far was hardly 10% of our collection. This store showcases the entire range.”

Besides the piece de resistance Art Deco light that welcomes shoppers, there are interesting flourishes in the building that retains much of its architectural character. One of the rooms, shaped like a hug, reflects the designer’s non-invasive approach to renovation. “We wanted the store to be welcoming, not intimidating. Like a museum, I want people to sit and enjoy the clothes and the finer points of the interior,” he says, pointing to a line-up of colourful papier mache and clay dolls sourced from around Tamil Nadu.

The sprinkling of curiosities – like the brick-toned Burmese dumbox and the quaint Kerala maharaja bust mounted on an old Jodhpur pedestal, reflect Garg’s inextricable relationship with crafts. 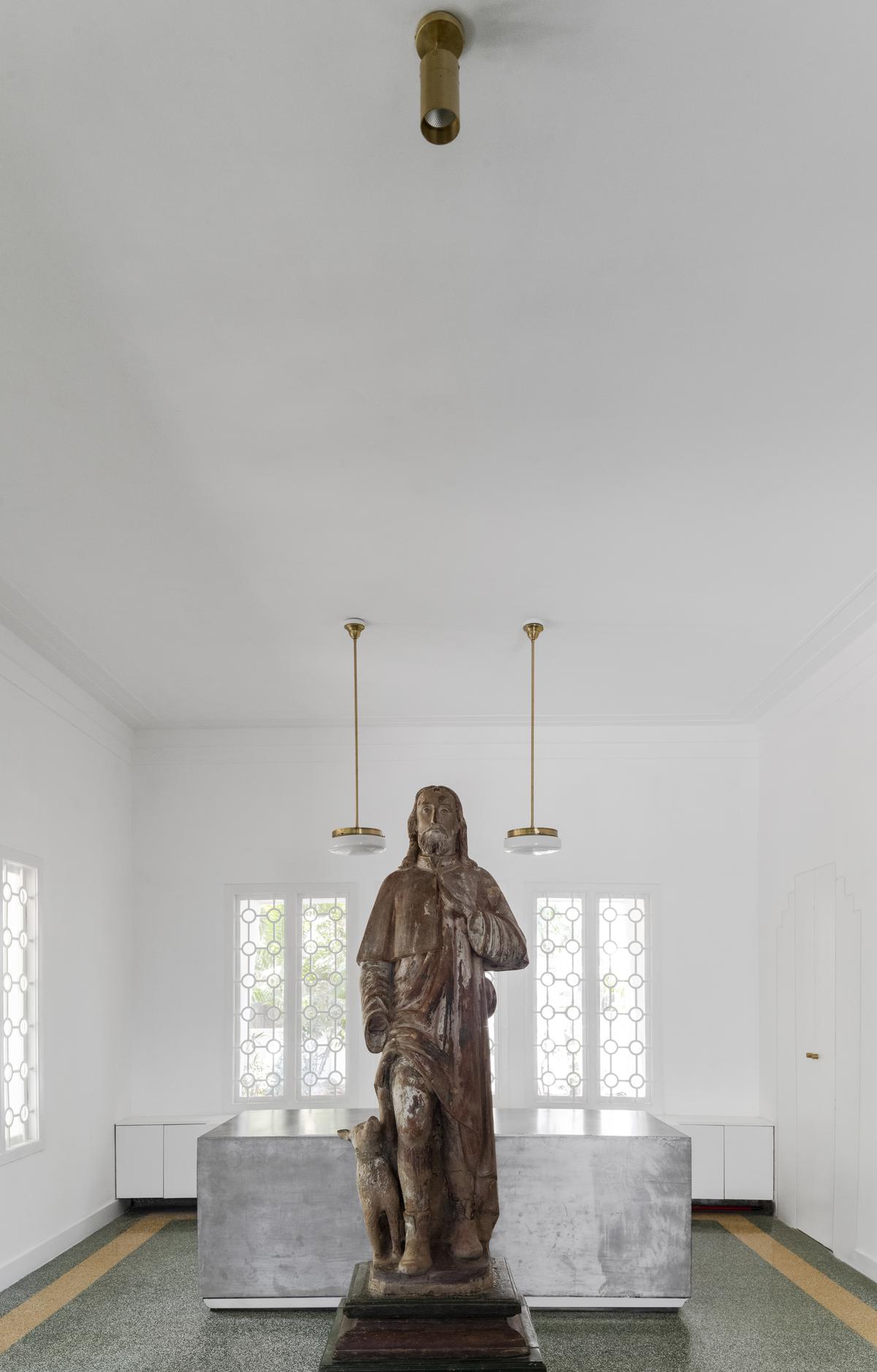 A snapshot of the store
| Photo Credit: SND

But this is not surprising coming from a designer who has been committed to reimagining handloom and Indian wear for a new generation. “To me, sustainability is about repurposing things and creating designs that are versatile and don’t get dated. A typical Raw Mango sari is something that today’s self-confident woman would love to wear. My sister wears it to parties too. All you have to do is reimagine the drape and the pairing. Beauty lies not just in the clothes you wear, but in your attitude. Look at how Malaika Arora carries herself in a sari!”

Garg has worked on a wide range of Indian traditions. His next experiment is mashru ikat. “We should create clothes that encourage a new generation of patrons who will help create an ecosystem for traditional crafts to survive,” he reasons.

The white washed walls and muted ceilings are a fine foil to the collection, which features typical Indian tones such as gulabi, rani pink and parrot green. The surprise items on display are a well-edited collection of saris in sophisticated pastels, besides outfits in updated styles. They echo the designer’s flair for walking the tightrope between the past and the present without resorting to cliches.