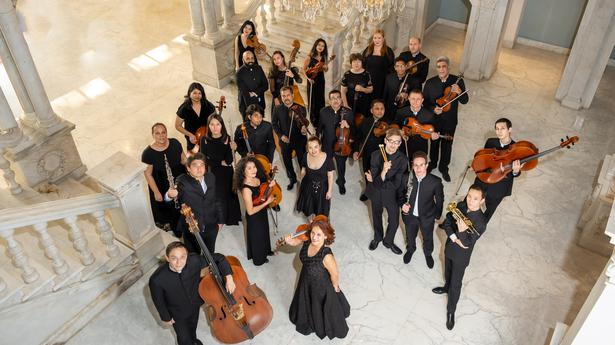 For the first time since the pandemic began, the Symphony Orchestra of India returns to the national stage with a series of concerts outside of its hometown Mumbai

For the first time since the pandemic began, the Symphony Orchestra of India returns to the national stage with a series of concerts outside of its hometown Mumbai

His sweet notes often permeate every concert hall like clouds of perfumed incense. Except for the odd sombre piece, Wolfgang Amadeus Mozart may well be the mascot of good cheer, his music light and cheery, even in these dark times. The composer who attained early stardom with every kind of opera or symphony he created, marked the zenith of the classical form. He revealed even dissonances imaginatively, the notes unfolding with dramatic speed and rich timbre. So it is only fitting that the Symphony Orchestra of India’s (SOI) Chamber Orchestra, based at the National Centre for the Performing Arts, Mumbai, chose the ‘Overture’ to the Marriage of Figaro, one of Mozart’s finest operas, to herald its return to the national stage after two years.

Over a phone call, SOI’s resident conductor Briton Mikel Toms, who found himself leading India’s first professional orchestra founded in 2006 by NCPA chairman Khushroo N Suntook and renowned violin virtuoso Marat Bisengaliev, says he found his way here via Kazakhstan where he had earlier worked with Bisengaliev over 15 years ago.

“When the role of the resident conductor came up, I was extremely interested and it all seemed to fit. We’d done four concerts before the curtains came down with the pandemic.” Toms, who is both flautist and pianist, majored in Music at Oxford and began conducting at the age of 20. He has recorded CDs for many labels, conducted other orchestras, worked with the Royal Philharmonic Orchestra, recorded for the BBC and is now working on the recordings of music by Tagore.

“Mozart goes down extremely well with Indian audiences, so we play him a lot. People are kind of hungry for his music,” says Toms, adding that the concert will also feature Ludwig van Beethoven’s Pastoral Symphony, one of his few works that contains programmatic content. “Chennai will be our second port of call, after two concerts in Bangalore, though we’ve performed in Mumbai sporadically through the pandemic. We put out a call for Indian composers to send in their pieces, hoping to incorporate some of their works in our repertoire and in our teaching programmes later this year.”

Some of the 35 musicians drawn from various nationalities are residents of Mumbai. “Rehearsing as a group online did not work often. So individual practice during the lockdowns was the key. We rehearsed in small groups when permitted,” says Xerxes Unvala, general manager, SOI. “Our academy lessons also went online at this point. The musicians are chosen for their musical quality, based on auditions conducted by Bisengaliev, given that we perform to international standards. We try to keep the group as stable as possible; some have been with us for nearly 16 years. But we also look for musicians who can teach, trying to create the next pool of talented young western classical musicians in India. The orchestra’s repertoire is broad, from Baroque to Contemporary with a partial lean to the Classical.”

Which is how Mozart’s score in D major for the ‘Overture’ with its rushing strings and lilting bassoon, will open the evening. The piece is a pulsating journey to joy that explodes into a grand fanfare — fit enough to herald the return of good times.

The concert is at 7.30 pm on June 19 at Sir Mutha Venkatasubba Rao Concert Hall. For tickets, www.5oh9.com.