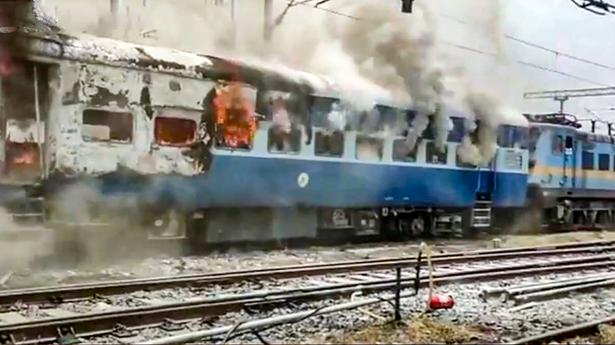 
U.S. says it ‘condemns remarks on Prophet made by BJP officials’

The United States on Thursday condemned remarks by BJP officials about the Prophet Mohammed that have sparked an uproar in Muslim countries. “We condemn the offensive comments made by two BJP officials and we were glad to see that the party publicly condemns those comments,” State Department spokesman Ned Price told reporters.

Amid widespread protests, the Union government on Thursday increased the upper age limit to 23 from 21 for recruitment under the Agnipath scheme for the year 2022.

The Congress MP wrote to the investigating officer of the ED to allow him exemption from the questioning scheduled on Friday (June 17) as he wants to remain with his ailing mother, Sonia Gandhi.

ED has overturned its initial position that an FIR was mandatory to register an Enforcement Case Information Report.

People throng petrol pumps in Srinagar after rumours of shortage

Unprecedented rush was witnessed at petrol pumps across capital Srinagar in J&K on Thursday, following rumours of shortage and a likely crisis in the coming days in the country.

Extended interrogation of Rahul Gandhi by ED is also a message to rest of the Opposition: D. Raja

Subjecting former Congress president Rahul Gandhi to extended hours of questioning by the Enforcement Directorate is an intimidatory tactic, D. Raja, general secretary of the Communist Party of India, said on Thursday.

Union Defence Minister Rajnath Singh, who arrived in the Kashmir Valley on Thursday for a two-day visit of Jammu & Kashmir, said that Pakistan was still pursuing a policy of “bleed India with thousands of cuts”.

The RBI on Thursday lifted restrictions on Mastercard that it had imposed last year for failing to comply with local data storage norms. The central bank had barred the U.S.-based payment gateway from onboarding new customers until it complies with Storage of Payment System Data norms.

The merger of different media departments to create a unified new entity is the first major organisational change to be implemented after the Udaipur  Chintan Shivir held last month.

Trinamool Congress asserted that if the funds are not released at the earliest, they will have to take “andolan” (protest) route.

The four-day ministerial conference that started on June 12 was extended by a day to give negotiators more time to iron out differences and strike the deal.