HomeLifestyleMadhana and the art of biryani: How the Coimbatore transwoman built a successful catering business
Lifestyle

Madhana and the art of biryani: How the Coimbatore transwoman built a successful catering business 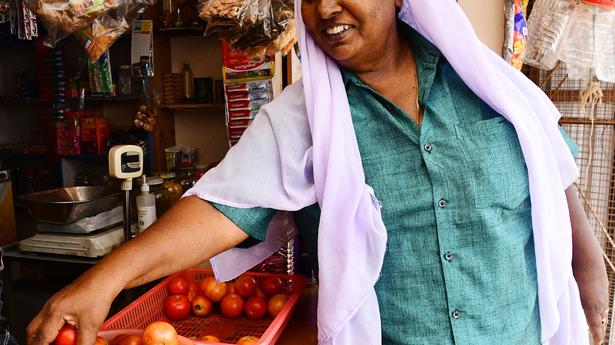 This Pride month, transwoman G Madhana, who runs a popular wedding catering business in Coimbatore, tells us how biryani brings down all barriers

This Pride month, transwoman G Madhana, who runs a popular wedding catering business in Coimbatore, tells us how biryani brings down all barriers

A few years ago, I went looking for the head cook at a friend’s wedding feast. I just had to shake hands with the person who cooked the biryani. That is how I met G Madhana, who was frying chilli chicken in the makeshift kitchen.

Today, seated on the front steps of her recently-constructed house in Coimbatore, Madhana ‘Amma’, as she is popularly known, says, “I didn’t expect to come this far when I ran away from home 50 years ago.” The 68-year-old is a leading wedding caterer in Coimbatore, and has cooked hundreds of feasts over the years, some of them for as many as 3,000 people. Thanks to the transgender community’s practice of a senior person ‘adopting’ someone younger as her daughter, Madhana is a mother, grandmother, and great grandmother to an army of transwomen in the city.

As she rose in her business, so did the many transwomen she trained. “Selvi, Thilaga, Mano, Saro…I have lost count,” says Madhana, recalling names of her protégés who are now running their own catering services.

When it comes to making biryani, Madhana is a stickler for rules. She lays out all the ingredients before she lights the stove. “The way we stir the rice and meat decides how good the dish will be,” she says. Her trademark touch, is measuring out spices and salt with just her hand. “I can tell,” she smiles. She teaches these nuances to every person she trains.

Madhana was among the first few transwomen to come out in Coimbatore, about four decades ago. “There were just 10 of us then,” she recalls. She came to Coimbatore after spending nine years working as a house-help and cook at a sprawling household in Pollachi. “Subeedamma, a senior cook there, took me under her wing,” she adds. “It was under her that I grasped the nuts and bolts of cooking for a large group of people.”

Her first few years in Coimbatore were hard. Madhana lived in tiny shared accommodations, surviving on the little money she made before business gradually picked up. Initially, she had two transwomen working for her. Then, more people joined her as orders increased. “They would work with me for around five years and go on to start their own business,” explains Madhana.

This way, the close-knit transgender community in the city picked up a skill that was crucial for its survival. “They had a means to earn, instead of going in for sex work or begging,” she points out. Ask any transwoman in Coimbatore
and she will in some way be linked to Madhana. Even today, important decisions taken by the community in the city happen in consultation with her.

“I am taking it slow now,” she smiles. “I’m getting old and will retire in a few years. My team will take over.” As for her family, they have accepted her. Madhana is from Thanjavur and after she left home, she made it a practice to visit her mother once a year.

“You know, even when I was in school, I was drawn to cooking,” she recalls, “I liked the sweet smell of masalas. I kept lingering in my mother’s kitchen. But she would shoo me away,” she laughs.