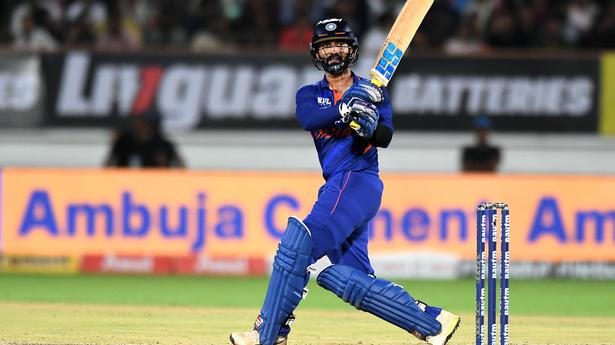 After the two batters power the Men in Blue to 169, the pacer delivers a fiery spell to derail South Africa’s chase; the hosts make it 2-2 with an all-round performance

After the two batters power the Men in Blue to 169, the pacer delivers a fiery spell to derail South Africa’s chase; the hosts make it 2-2 with an all-round performance

Dinesh Karthik produced one of his finest T20I knocks (55, 27b, 9×4, 2×6) to set up a thumping 82-run win for India in the fourth T20I against South Africa and level the five-match series 2-2 at the Saurashtra Cricket Association Stadium on Friday.

When Karthik arrived at the crease in the 13th over, India was wobbling at 81 for four after being asked to bat on a pitch of variable bounce that assisted the fast bowlers. He found an able ally in Hardik Pandya (46, 31b, 3×4, 3×6), the duo adding 65 off just 33 balls for the fifth wicket.

Rishabh Pant’s men finished strongly, making 169 for six in 20 overs after being 56 for three at the halfway stage.

Once he got his eye in, Karthik flourished in the final phase of the innings, smashing the spinners and pacers as India rattled up 73 in the last five overs.

Karthik first went after Anrich Nortje, hitting two boundaries through the off-side. He then launched into Keshav Maharaj, sweeping and reverse-sweeping the left-arm spinner for three consecutive boundaries in the 17th over.

In the next over, it was Dwaine Pretorius’ turn to suffer as Karthik walked across to the off-stump and swept the medium-pacer for a six and a four on the leg-side. The 36-year-old Tamil Nadu batter reached his maiden T20I half-century with a six over mid-wicket in the final over bowled by Pretorius.

Needing 170 to seal the series, South Africa’s chase never took off. Skipper Temba Bavuma had to retire hurt after injuring his left elbow while diving to complete a run at the start of the fourth over.

Quinton de Kock, returning to the team after recovering from a wrist injury, hit a few boundaries off Hardik but was run out after a mix-up with Pretorius. Avesh Khan soon had Pretorius caught behind before Yuzvendra Chahal trapped Heinrich Klaasen in front.

Harshal Patel then got rid of the dangerous David Miller for the second successive time, castling the South African left-hander with a delivery that angled across. Rassie van der Dussen and Marco Jansen tried their best, but Avesh struck thrice in the 14th over as he finished with figures of 4-0-18-4. Chahal’s spell read 4-0-21-2.

Earlier, Lungi Ngidi, who replaced Kagiso Rabada, struck in his first over when he had Ruturaj Gaikwad caught at slip. In the fourth over, Jansen, who came in for Wayne Parnell, dismissed Shreyas Iyer leg-before.

Ishan Kishan, who looked good during his knock of 27, tried to ramp Nortje over the ’keeper and edged to de Kock. Pant fell cheaply again before Hardik and Karthik turned the game on its head to keep the series alive.