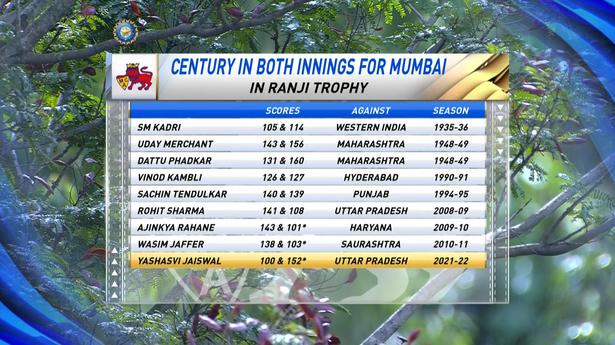 Yashasvi Jaiswal and Armaan Jaffer plundered a hapless bowling attack to help Mumbai pile on heaps of runs and permanently shut the door on Uttar Pradesh on the penultimate day of the Ranji Trophy semifinal at Just Cricket Academy.

Riding on the duo’s association of 286 runs, with Jaiswal becoming only the ninth Mumbai batter to notch hundreds in each innings in a Ranji game, Mumbai amassed 316 runs off 98 overs on Friday to end the day at 449 for four in its second innings. With a gargantuan lead of 662 runs, Saturday’s proceedings will be a mere formality.

While it was understandable that Mumbai opted to bat the entire day with the first innings lead having decided the fate of the game, it will be interesting to see if Mumbai give its bowling pack another go at UP in a bid to register an outright win.

💯 in both the innings of the #RanjiTrophy game for Mumbai! 👏 👏@ybj_19 joins a special list with a brilliant batting display in the #SF2 against Uttar Pradesh! 👍 👍 @Paytm | #MUMvUP | @MumbaiCricAssoc

The day, however, belonged to Jaiswal and Armaan, who were offered multiple lives by UP fielders who maintained their consistency of dropping regulation catches. Having dropped four catches in the first innings, UP added three more.

Jaiswal was given a reprieve at gully by Madhav Kaushik off Shivam Mavi in the fifth over of the innings. Earlier in the over, wicketkeeper Dhruv Jurel injured the middle finger of his right while diving down the leg and substitute Aryan Juyal stepped on for the rest of the day.

Jaiswal, who had been patient for 54 balls for opening his account the evening earlier, then started milking the ball end displaying his flamboyance only once the part-timers came in. Armaan, at the other end, enjoyed his share of luck with Priyam Garg dropping a dolly off Ankit Rajpoot just after the drinks break.

Once the fate of the game was clear, the UP pace trio took it easy. Dayal, Rajpoot and Mavi shared just 20 overs between them, with everyone except Garg rolling his arm over.

It made Jaiswal and Armaan’s job even easier as they crossed their respective hundreds, batting on 77 and 80 respectively at lunch, without any fuss after the break. Just before Jaffer edged Mavi to Juyal down the leg, Jaiswal was fortunate to have been caught behind off a Dayal no-ball.

With Jaiswal eyeing to convert his third consecutive hundred into a double, Mumbai batted on. But he mistimed a pull off Prince Yadav’s medium-pace to see Juyal running in and neatly pouching the skier in front of the batter.