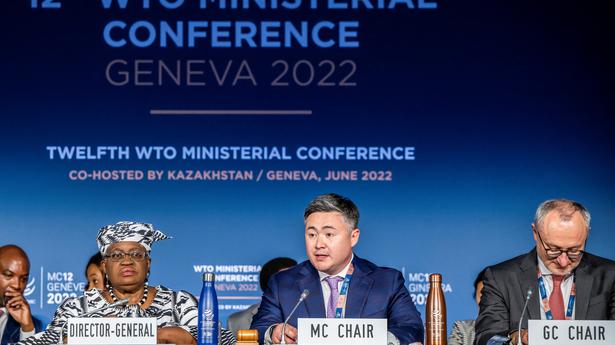 The countries are still arguing over small details holding up a decision on these crucial issues, they said.

While the UK and Switzerland are said to be obstructing an agreement on TRIPS (Trade related aspects of Intellectual Priority Rights) waiver for COVID-19 vaccines, a group of small nations has raised concerns over the current negotiations on fisheries subsidies, they added.

Despite these differences, hectic negotiations are still going on to iron out issues.

“India always wants to find solutions but certain countries are stuck on fewer words here and there,” they added.

The negotiations, at the 12th ministerial conference which entered the fifth day on Thursday, were looking to finalise decisions on granting temporary patent waiver to manufacture COVID-19 vaccines.

Agreement on fisheries subsidies could have been reached by the WTO after a gap of nine years. It was in 2013 at the Bali ministerial conference of the WTO, the member countries sealed the trade facilitation agreement to promote seamless movement of goods across the global borders.

Under the fisheries subsidies agreement, the 164-nation body was discussing to eliminate subsidies on Illegal, Unregulated and Unreported (IUU) fishing activities in all the regions — territorial (12 nautical miles from seas shore), Exclusive Economic Zones or EEZs (200 nautical miles) and high seas (beyond 200 nautical miles) including in overfished areas.

The members were trying to converge views on granting temporary patent waiver for manufacturing COVID-19 vaccines for a period of five years. Under this, a country can issue an authorisation (compulsory licence) to its domestic pharma firms to make that vaccine without taking approval from the original maker. Besides, it was also decided to permit export of those vaccines.

On the WTO response of pandemic and future pandemics, sources said, members are expected to agree on coming out with a declaration, which would not change any rights and obligations because there were certain sensitivities involved in the matter.

The WTO was also trying to finalise a proposal for not restricting supplies of food grains to the United Nations World Food Programme (WFP).

According to sources, India is taking global leadership on all the issues and it was at the centre of WTO negotiations.

India put forth aggressive draft texts in all pillars of WTO negotiations rather than being reactive, as in the past.

The four-day ministerial conference that started on June 12 was extended by a day to give negotiators more time to iron out differences and strike the deal.