HomesportDominant Mumbai on the verge of final
sport

Dominant Mumbai on the verge of final 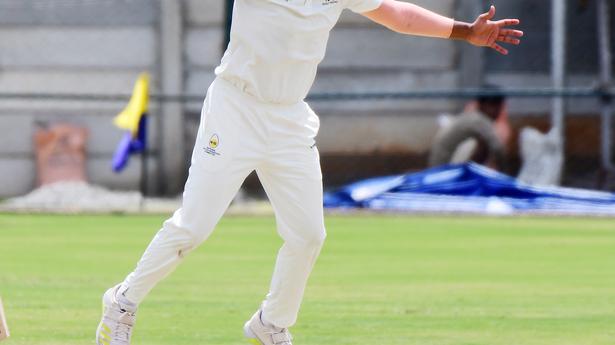 Shaw’s men dismiss UP for 180, take overall lead to 346 with nine wickets in hand

Shaw’s men dismiss UP for 180, take overall lead to 346 with nine wickets in hand

Mumbai moved closer to its objective of ending its six-year drought of a Ranji Trophy title by dominating the third day’s proceedings of its semifinal versus Uttar Pradesh at Just Cricket Academy on Thursday.

With a whopping lead of 346 and nine wickets still remaining in the second innings, besides giving its batters vital game-time, the Mumbai think-tank will be keeping a close eye on the proceedings in the second semifinal at Alur.

UP started the day at 25 for two in quest of the Mumbai’s 393. Barring the first hour, when opener Madhav Kaushik and captain Karan Sharma looked solid, Mumbai was in control all through the day. Kaushik’s drives off Mohit Avasthi and Karan’s hook off Tushar Deshpande for six were a treat to watch.

But once Karan poked at Avasthi and Sarfaraz Khan lunged to his right at second slip for a sharp catch, the Mumbai camp became increasingly vocal.

Then, off-spinner Tanush Kotian started the rout with Suved Parkar at forward short-leg taking an impressive catch on second attempt off a bat-pad chance offered by Kaushik. It triggered a collapse with four wickets falling for 11 runs in 17 balls.

While Kotian trapped Rinku Singh lbw, Avasthi followed it up with a double-strike over, with Sarfaraz taking yet another sharp chance to dismiss Dhruv Jurel.

Shivam Mavi then used the long handle but Deshpande’s raw pace cleaned up Yash Dayal as UP got bundled out for 180. just over an hour into the second session.

With a lead of 213 runs, Mumbai opted to bat again in a bid to kill the contest. Prithvi Shaw and Yashasvi Jaiswal started in contrasting fashion. Shaw, dropped on 13 at gully by Rinku, was at his bludgeoning best, while Jaiswal dropped anchor and got into a blockathon.

When Shaw top-edged a sweep off Saurabh Kumar’s left-arm spin into the deep, he had scored 64 off 71 balls, while Jaiswal had played out a whopping 52 dot balls. When he opened his account with a whip off Ankit Rajpoot in the next over, he raised his bat in jest to the Mumbai dressing room that applauded his application.

The left-hander then flourished along with Armaan Jaffer as the duo’s unbroken association of 67 runs helped Mumbai end the day at 133 for one.