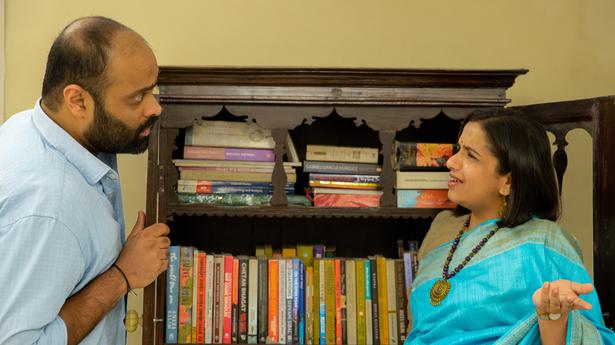 Madras Players’ latest production, a sharp satire in the form of love letters unabashedly takes on the literary world, armed with humour.

Madras Players’ latest production, a sharp satire in the form of love letters unabashedly takes on the literary world, armed with humour.

Letters have always paved the way for good stories. But what is one likely to find in letter exchanges between two writers, an amateur and a veteran? A two-person play finds out.

Madras Players’ latest production, helmed by Nikhila Kesavan and brought out in collaboration with Chennai Art Theatre, titled Dear Omana: Notes on how to be a Literary Sensation is a satire told for the stage.

Adapted from writer and columnist Krishna Shastri Devulapalli’s epistolary play and parts of his novel How to be a Literary Sensation, the play, says Nikhila, stays true to the former’s work. Though Nikhila was familiar with his columns and novels, it was an unassuming Facebook friend suggestion that connected the two in the middle of the lockdown in 2020.

This was also how Nkhila was introduced to Dear Anita and How to be a Literary Sensation. On reading both, a few excerpts from the book seemed to fit perfectly in the play, and Nikhila reached out to the author for a green flag.

“I rewrote the play to accommodate the excerpts and shared it with him, and he liked what I had done,” says the director. The initial plan was to perform it during lockdown. “But when you are doing something funny, you want to hear the audience laughing. Online is so one-sided. So we decided to wait,” she adds.

“The dynamics of the play are different from how it was written earlier, but it is still in the form of love letters. It is very interactive between the two characters,” says Nikhila. Omana and Krishna Shastri Devulapalli are the protagonists — “The whole play follows how Krishna seeks tips and mentoring from Omana to survive and navigate the literary world,” Nikhila says.

In the play, Nikhila plays Omana, while the author is played by V Sarvesh Sridhar.

For Nikhila, taking on a satire of this kind, was a first. “It was a challenge, probably more so because I decided to play one of the characters. I think once we started, it just flowed. We went with the script.” Though the two characters are “technically reading letters”, Nikhila promises that the stage would not be devoid of action. The key is to perform the letters and not simply read them, says Nikhila.

A lot of the inspiration comes from the script, adds Nikhila. For instance, one of the essays in the book talks about how writing is all about mathematics. “The moment I chose the essay, automatically, the design for it emerged. We immediately thought about enacting how a writer does number-crunching.” Though musical interludes are part of the narrative, choreography is something to look forward to.

The play unabashedly takes on writers, publishers, editors, translators and others in the literary world, armed with humour. The words simply do the job, concludes Nikhila.