Aparna Balamurali: ‘My experience in ‘Soorarai Pottru’ still helps me’ 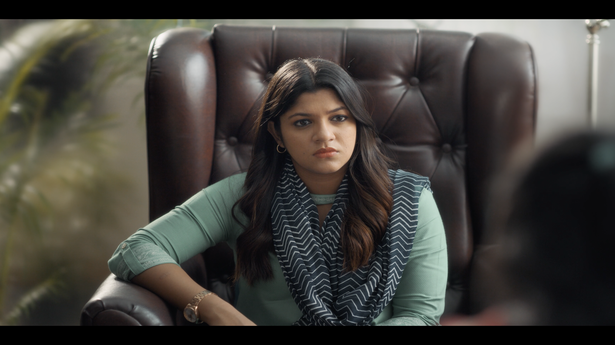 Aparna Balamurali on her twin releases, ‘Veetla Vishesham’ and ‘Fingertip’, this Friday

Aparna Balamurali on her twin releases, ‘Veetla Vishesham’ and ‘Fingertip’, this Friday

When it rains, it pours. Aparna Balamurali knows that well.

Back in February 2019, two of her projects — Tamil film Sarvam Thaala Mayam and Malayalam film  Allu Ramendran — released on the same day. Cut to 2022 and this pattern repeats itself. Both  Veetla Vishesham and her debut web series,  Fingertip Season 2 (on Zee5), release this Friday.

“It feels great. I’ve been waiting for releases for a while, and that two projects coming out on the day is extra special,” says Aparna.

The second season of  Fingertip, which also stars Prasanna and Regina Cassandra, sees Aparna playing Shruti, a psychologist. It revolves around the lives of six individuals affected by the ever-changing digital space. “When the director (Shivakar Srinivasan) narrated its storyline, I was interested because it is a subject that society needs to watch, and learn. The tech-thriller genre is very interesting. Most of us can relate to subjects like negativity on social media, which is also showcased in this season.”

This is Aparna’s first web series, and she is looking to explore the space more in the future. “It’s an interesting way to convey a story. While cinema gets over in a couple of hours, with all the twists and turns packed in it, a web-series gives you the scope to end every epidode on a high. The ‘what will happen next’ gives you a very different kind of an adrenaline rush.”

Aparna rose to popularity among Tamil cinema fans thanks to her role in Suriya-starrer Soorarai Potru (2020), a film she regards as ‘life-changing’. “Not just because of the fame it brought post release, but due to the intense training and workshops that happened before its filming. It helps me even now while I’m on any film set,” she says.

“We all know how big a star Suriya is, but the character I played (Bommi) was a strong, independent woman chasing her dreams. Even today, women walk up to me and tell me that they want to be like Bommi. That’s a huge compliment,” says Aparna, who is currently doing Malayalam film  Thangam with Vineeth Srinivasan and has a few other Malayalam projects in the pipeline, “I’m also looking forward to films like  Veetla Vishesham, which make you feel at home while in theatres.”

Aparna comes from a family of musicians. Her parents are both into music. “Since childhood, I’ve been listening to them. I’m the kind of person who cries listening to certain songs; music means that much to me. I hope to sing in films and work on some original songs too at some point of time.”