HomeentertainmentEisha Chopra on ‘Salt City’: I still have that love-hate relationship with Mumbai
entertainment

Eisha Chopra on ‘Salt City’: I still have that love-hate relationship with Mumbai 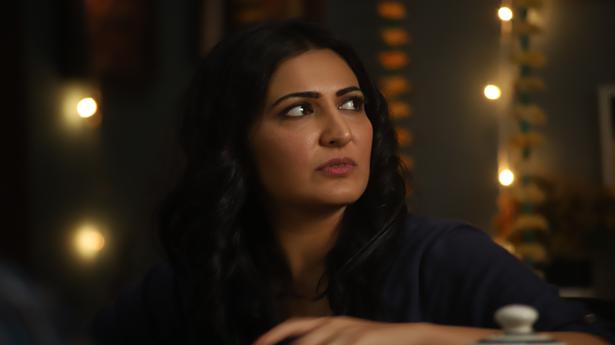 The actor-writer, who will be seen next in family drama ‘Salt City,’ speaks about her relationship with Mumbai, her next project with Vidya Balan, and more

The actor-writer, who will be seen next in family drama ‘Salt City,’ speaks about her relationship with Mumbai, her next project with Vidya Balan, and more

“Mumbai adds salt to everything,” says a character in the trailer of SonyLIV’s upcoming web-series Salt City. It’s a sentiment familiarised by Bollywood about its capital; that it is a bustling factory which either makes or breaks dreams. For Eisha Chopra, who plays one of the leads in the family drama, the dialogue is as real as it can get, as it speaks of the equation the Delhiite has shared with Mumbai.

In a quick chat with us, the actor-writer, known majorly for web titles like P.O.W. Bandi Yuddh Ke, What The Folks, and Out Of Love, speaks about the pros of the streaming platform boom, and what Salt City is all about.

Like the characters in the show, you have had a interesting relationship with Mumbai. Does it continue to be the city of dreams?

I moved here seven years ago, and I still have that love-hate relationship with Mumbai. It does add salt to your wounds, and a bitterness to everything you experience. It isn’t an easy place to live in, be it the cost of living, the limited interaction with nature, or the dense population. But there is something that comes through all of it, and that is the spirit of the people who live here. They are all bound by something invisible and unshakeable.

You have been vocal about the issues you faced as a newcomer. Has the number of opportunities for aspirants increased after the surge in popularity of streaming platforms?

Definitely. I can see the change around me as more people are working now. Being a screenwriter myself, even the way writers are treated has changed. Nowadays, we get paid well and our work has value. I hope it continues and that the problems of the film industry continue to not meddle with the work-supply ratio.

Most of your releases have been on television and streaming. Do you still believe in the importance of the big screen for younger artists?

As an artist, it doesn’t make a difference if I am shooting for a web series or a film. Of course, there is prestige to the big screen, and a certain reach that comes with it. However, nowadays, only the big-scale Baahubali-ish films get a theatrical release. It also matters if I want to tell that story.

I won’t refuse a big-screen role, but I also believe that I have a lot to offer in this alternate space that has worked well for me because I want to be in these kinds of stories.

Tons of web content is being released back-to-back in Bollywood. Do these projects continue to have an active viewership post the reopening of theatres?

Yes, because, unlike theatres, nobody is fighting for space on the web. The battle is to win the audience’s head space. OTTs are catering to all age groups, whether it is my mother who wasn’t tech-savvy or my 10-year-old nephew. With infinite content coming up in different languages and for different demographies, I don’t see this boom diminishing.

A still from ‘Salt City’

Many theatre veterans have said that the experience of a theatre actor is different than that of a film star, because the former exerts more energy. Being from a stage background, do you miss performing in front of a live audience?

The idea of performing on stage changed post the pandemic. Yes, a theatre performance is a different experience and requires a different set of skills. The stage is an actor’s medium whereas a film is a director’s.

But I disagree with the notion that theatre acting is the better, more authentic form of art. I love the stage, but when I discovered the camera, I fell in love with it too. The camera allowed me to explore the philosophy of ‘less is more’ as an actor.

Your next big project is the Vidya Balan-starrer ‘Lovers,’ for which you co-wrote the screenplay. Your acting career started with a Vidya Balan film too — ‘No One Killed Jessica.’ Life has come full circle of sorts..

I met Vidya Balan only briefly during No One Killed Jessica, but I am so glad that she is doing Lovers. She is one of the nicest actors I know. Lovers is an exciting project, something I felt like I was born to write; it’s in post-production and we are eagerly waiting for its release.