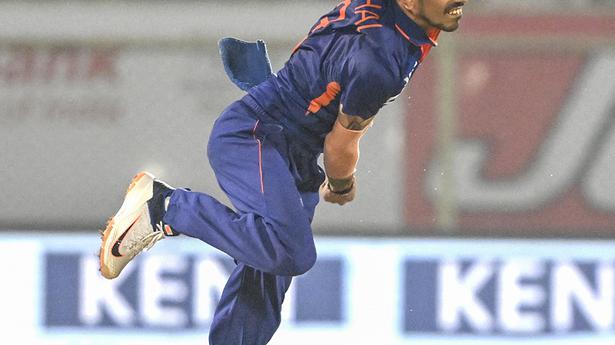 
The little man floors the big guns. He does not employ heavy weapons either. He kills ’em softly.

Watching him at work, you are reminded of the Muhammed Ali song, “He floats like a butterfly and stings like a bee.”

When Yuzvendra Chahal throws the ball up, he does the same. The revs on the ball cause it to either dip or drift.

The batter, whose eyes light up at the flighted delivery and who lines up for a massive hit, is flummoxed as he never quite reaches the ball.

The resultant catch is gobbled up. Chahal is the toast of his team.

He is an attacking bowler, always on the look-out for wickets. And he lures the batsmen to their doom.

Chahal’s three for 20 here on Tuesday night in the crucial third T20I, was a masterclass in the art of leg-spin.

He is a jadugar, a wrist-spinner with a bag of tricks. Chahal has a good wrong ’un, an effective flipper and a handy top-spinner to go with his potent leg-spinners. Importantly, he has control.

Chahal, bowling with rhythm and an easy action, consumed the dangerous Dwaine Pretorius whose dab shot came to nothing as the ball spun away slightly and nestled in ’keeper Rishabh Pant’s gloves.

Rassie van der Dussen too succumbed to a leg-spinner with drift. He attempted to strike the sphere square but only managed to nick the ball.

One of Chahal’s tricks when the opposition batters are going for runs is to throw the sphere wide. And making the batter reach for it. But then, these deliveries have drift and dip. The batter invariably ends up miscuing the stroke.

As it happened with Heinrich Klaasen, who, desperate for the big blows, pursued a fuller length and rather widish leg-spinner only to hole out at extra-cover.

The dismissal encapsulated the perfect night for Chahal. But then, hasn’t he made a habit of becoming a game-changer?

It is hard to predict how he bowls. He can be a skiddy, slippery customer one day. Chahal can also get the ball to bounce using the seam.

He had a wonderful IPL for Rajasthan Royals this season. The 31-year-old Chahal won the purple cap for the highest number of wickets in the competition with 27.

He can bowl and deliver under immense pressure. Mentally tough and consistent he is.

Chahal is a jovial, chirpy individual with an eye for wickets.