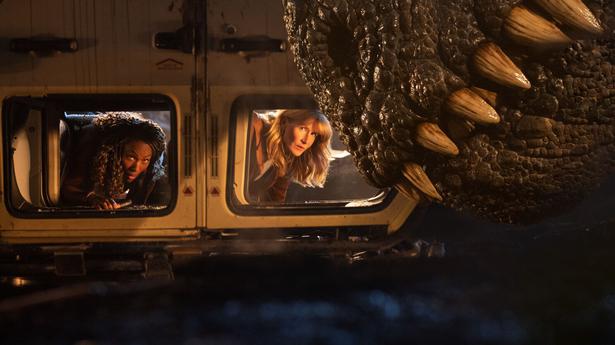 The concluding film in the ‘Jurassic World’ trilogy packs in enough thrills and references to the original, also bringing Sam Neil back into the Jurassic universe

The concluding film in the ‘Jurassic World’ trilogy packs in enough thrills and references to the original, also bringing Sam Neil back into the Jurassic universe

The concluding film in the Jurassic World trilogy, following 2015’s Jurassic World and Jurassic World: Fallen Kingdom (2018), has more of everything. Jurassic World Dominion, at 146 minutes, is the longest in the franchise and uses more animatronic dinosaurs (18) than its predecessors.

Colin Trevorrow returns to director duties after J. A. Bayona’s spooky and heart-breaking Fallen Kingdom. New cast includes DeWanda Wise, Mamoudou Athie and Campbell Scott. Wise plays Kayla Watts, a tough pilot; what is with all these magnificent women and their flying machines? Remember Tig Notaro in Army of the Dead? Athie is the head of communications at InGen’s rival Biosyn Genetics, and Scott is Lewis Dodgson, the CEO of Biosyn.

Four years after the volcano blew up Isla Nublar, the dinosaurs that could be saved are living alongside humans and fighting for the same finite resources. When a plague of gigantic locusts (very Biblical) lays waste to farms all over the United States, it is time for Sattler to mount an investigation. She is convinced Biosyn has something to do with the pigeon-sized locusts (ewww). She ropes in her old friend and colleague, Grant, who is still digging in the desert for dinosaur bones, and also has help on the inside as Malcolm is working as a consultant at Biosyn.

Owen, Claire and Maisie are living off the grid, but there is always someone looking for Maisie. When Maisie and the raptor, Blue’s offspring Beta are taken, Owen and Claire head for the Biosyn dinosaur sanctuary.

Jurassic World Dominion moves along briskly. There are some truly eye-wateringly beautiful sequences including Claire’s encounter with the razor-clawed Therizinosaurus in the gloomy lake. Call backs to Steven Spielberg’s Jurassic Park abound from the returning cast to John Williams’ theme, and of course, the dinosaurs.

The innocent-looking Dilophosaurus, which got rid of greedy Nedry, gets rid of a bad guy here too. And there are the raptors and steamer-sized herbivores sailing along. While the Giganotosaurus is the bigger and meaner dinosaur, there is something savagely beautiful and awe-inspiring about the T-Rex as always.

The sequence in the underground dinosaur market at Malta reminded one of that other hive of inequity, the Mos Eisley space port. Incidentally, Trevorrow was working on the third Star Wars sequel, what was to become The Rise of Skywalker.

Jurassic World Dominion has packed enough thrills and references to the original to satisfy fans and action movie aficionados. An arc seems closed, or at least till the next time someone scrapes the bottom of the creativity barrel. In the meantime, one could watch the Giganotosaurus and T-Rex face off…