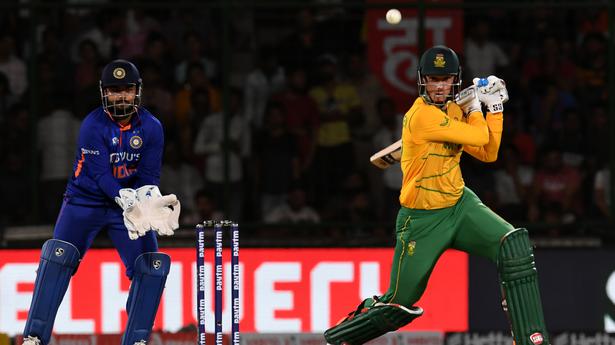 Their 131-run unbroken partnership for the fourth wicket flattens India as the visitors go 1-0 up; Kishan’s 48-ball 76 goes in vain for the hosts

Their 131-run unbroken partnership for the fourth wicket flattens India as the visitors go 1-0 up; Kishan’s 48-ball 76 goes in vain for the hosts

When South Africa stared at India’s 211 for four, only 18 times in T20Is had teams chased down targets of 200 or more.

On Thursday, before the packed stands of Ferozeshah Kotla ground, David Miller and Rassie van der Dussen raised a match-winning stand of 131 and made it the 19th occasion by pulling off the sixth highest run-chase and South Africa’s biggest.

South Africa’s chase picked up momentum when the dangerous Miller and van der Dussen collected 33 runs in two overs — from Harshal Patel and Axar Patel — to make it 125 for three after 13 overs and never looked back.

Needing 64 off 30 deliveries, decisive blows followed when 22 runs came off successive overs from Harshal and Bhuveshwar Kumar and soon, South Africa was over the line with seven wickets and five deliveries to spare.

If India slipped at the threshold of a world-record setting 13th straight victory, it was due to the bowlers’ failure to rise to the challenge.

After Shreyas Iyer dropped a regulation catch of van der Dussen when on 29, the batter smashed his next 46 runs off just 15 balls to remain unbeaten on 75. In contrast, after a 22-ball 50, Miller steadied himself for an unbeaten 64.

Earlier, India raced to 211, thanks to Ishan Kishan’s calculated assault, the measured strokeplay from Shreyas Iyer and the late flourish from Rishabh Pant and Hardik Pandya, who added 46 off 18 balls.

Kishan impressed as he grew in confidence to finish with 76 off 48 deliveries. The left-hander, after hitting three sixes and 11 fours, holed out in the 13th over.

A delivery after a review saved him from a caught-behind decision, Kishan failed to clear long-off. This was similar to the way his opening partner Ruturaj Gaikwad fell. A delivery after a shot from Ruturaj burst through the reverse cup of Pretorius and cleared the ropes, a mishit was easily taken by Bavuma at mid-wicket.

Shreyas produced a 27-ball 36 but the momentum was expectedly provided by the flamboyant duo of Pant and Hardik. Pant, who lost his balance and tripped more than once during his flashy innings, kept the scoreboard ticking with two sixes and as many fours.

But it was Hardik who came up with some wristy shots to send the ball past the mid-wicket boundary more than once.

Hardik carried on with his IPL form during his unbeaten 12-ball 31, a well-timed six off Anrich Nortje being the pick. In all, India’s batting came good against a quality attack. If 51 runs came in the PowerPlay, another 51 followed off the next four. The next five produced 48 and the last five, 61. The total of 211 wasn’t enough once Miller and van der Dussen got going.