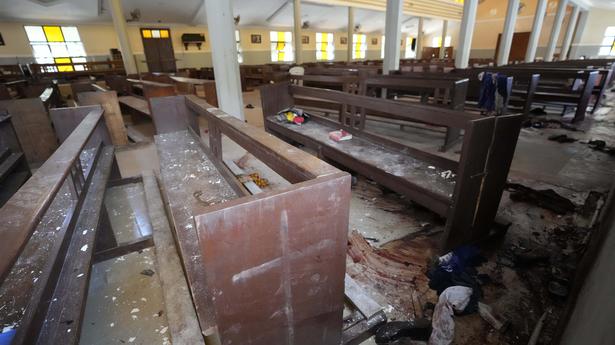 Police said the gunmen hid among worshippers inside St. Francis’ church in Owo and opened fire on the congregation

Police said the gunmen hid among worshippers inside St. Francis’ church in Owo and opened fire on the congregation

The toll from a gun attack on a Catholic church in southwest Nigeria’s Ondo state has risen to 40 and the number of wounded to 61, local authorities said.

The attack by gunmen during mass at St. Francis’ church in Owo, June 5, was a rare assault in a region usually considered safer than others in the country.

“The number of deaths now is 40,” Governor Arakunrin Oluwarotimi Akeredolu said in a statement on June 8.

“On admission (in hospital) receiving treatment we have 61,” he said, adding that 26 others had been discharged.

The dead and injured include children, authorities have said.

Police said the gunmen hid among worshippers inside the church and also opened fire on the congregation through the windows from outside.

Fragments of explosives and three unexploded improvised explosive devices were found at the scene.

A priest who was conducting the service told AFP that some worshippers managed to hide in the vestry with others, including children, for about 20 minutes before emerging to scenes of carnage.

The bloodshed “is indescribable. There is no word to describe it,” the governor said.

He added that residents were understandably angry but should not try to seek revenge.

Security has been stepped up and the state will soon issue an executive order requiring all places of worship to install close-circuit TV cameras, he said.

The attack drew international condemnation, including from Pope Francis.

Nigeria’s military and police are battling on several fronts, with jihadist groups in the northeast, criminal gangs in the northwest and centre and separatist stirrings in the southeast, among other threats.