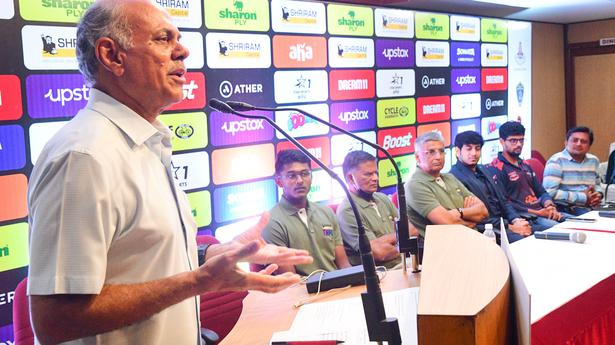 
It has been a three-year wait and the city cricket lovers can now heave a sigh of relief as the sixth season of the Shriram Capital TNPL has finally arrived. The launch of the same was held at a city hotel here on Thursday.

D. Lakshminarayanaswamy, President, Coimbatore District Cricket Association (CDCA), must be a happy man as the event comes at a time when the city fans are starved of sheer cricket entertainment in this part of the region.

He and his team have worked so hard in getting the SNR ground ready on time before the pandemic struck and further delayed his plans. “I am sure Coimbatoreans will be happy to witness the TNPL matches to take place here. The venue here uses only treated water to maintain the field,” said Lakshminarayanaswamy.

“With the support of the TNCA and our well wishers, we completed the ground in a record time. But due to Covid, the matches could not take off,” he added.

However, he believes that this season will bring in more excitement as the event has grown bigger and brighter. Besides that, it is also the first time that a TNPL final is being held outside Chennai and Coimbatore fans have reasons to be all the more happy as it is happening in their hometown.

The sixth edition, which begins at the India Cements Sankar Nagar ground in Tirunelveli on June 23, has added Coimbatore and Salem to its venue list. “We are hopeful of getting a good response from both these venues,” said R.S. Ramasaamy, the TNCA secretary. One need not doubt that given the passion of the people here.