A manager by day and an actor by evening … Surabhi Santhosh’s transformation is effortless. The 36-year-old founder of Curtain Call Theatre (CCT), takes acting lessons for aspiring actors that will lead to a production to be staged at Rangbhoomi Spaces in Hyderabad.

At Sundarayya Vignana Kendram in Gachibowli, B Studio artists are in rehearsals to stage the 15th show of New Bombay Tailors in Tenali, Andhra Pradesh on June 8.

Elsewhere, the Natarang Theatre team is gearing up for a production-oriented workshop, to present their second ticketed play in Hyderabad.

The stage is set for a change, as nascent Telugu theatre groups take steps to put up ticketed shows, with the hope to make theatre a sustainable career option.

With a history of mythological and historical plays, contemporary Telugu theatre faces its share of challenges. While the iconic Surabhi group’s s traditional theatre continues to produce classical padyanatakam (poetic drama) groups such as Bhoomika, Samahaara and Nishumbita keep the drama alive with social themes. The annual ‘Parishat Natakam’ — theatre competition for groups — also creates a buzz among Telugu theatre groups vying for a prize. “The goal of staging a ‘parishat natakam’ is to win the competition,” points out actor-director Shaik John Basheer, hinting that audience reception is of little interest. Basheer started B-Studio in 2020 to build a theatre community and ‘show artists that it is possible to make a living by doing Telugu theatre.’

The young brigade, however, with some support and sponsorship from the Department of Culture, Telangana State, forges ahead with production-oriented workshops that culminate in plays incorporated with different elements. Moving away from a conventional theatre performance, these productions adapt to the changing times to bring in new audiences and also motivate young theatre artists. Devised productions, scenes with music and dance, and classics adapted to suit nativity are facets enhancing the collective experience of watching a play. For example, Bridge Theatre’s Ramji and Somdevi is a native take on Shakespeare’s Romeo and Juliet; its protagonists are two tribal lovers who express love in the Telangana variant of Telugu. Kallu, a CCT production, tweaks a 50-year-old story by (late) Gollapudi Maruthi Rao to add songs, dance and a few extra characters. Says director Kranthi Kumar of Natarang whose play Bhootha Ganam was devised against the backdrop of Theyyam, “Having different elements that create an impression among the audience and visually attractive scenes are crowd pullers.”

CCT’s founder, Santosh, hails from the illustrious Surabhi family and was introduced in Surabhi plays as a child artiste. “I never knew one could pursue a degree in theatre,” says the actor currently pursuing MPhil in Theatre Arts from Potti Sriramulu Telugu University. Having moved away from his family 17 years ago to pursue contemporary theatre, Santosh is an actor, lighting designer, associate director, set designer and make-up artist with other theatre groups. He does not acts for free. “Earlier, people would not pay actors in Telugu plays but since my living is based on this industry, I work for money.”

CCT’s second production Petromax Panchayati, depicting the woes of a remote village in Telangana without power, had narrators driving the story forward. “Even an old story treated differently piques audiences’ interest,” he adds. The regional theatres of Kannada, Marathi and Tamil are better funded as the audience buys tickets to watch a play when compared to Telugu theatre. ”The culture of buying tickets has been unfortunately missing here,” opines Basheer, who hopes to make his group travel with New Bombay Tailors’ as part of a 100-play project that has had shows in Hyderabad, Kurnool, Narsaraopet, Kavali and Guntur. “We charge ₹ 75,000 for a show and pay ₹ 3000 to an artist. The goal is to do 10 shows a month so that the actor earns ₹ 30,000.”

In the last 17 months, Rangbhoomi Spaces at Gachibowli has had more than 50 ticketed Telugu shows. Founder and theatre director Jay Jha calls it a positive trend and says, “Ravindra Bharathi, the venue for most Telugu plays, has invitees as audience and a play begins only after an hour-long welcome ceremony and speeches. That has to change; we need to bring in professionalism.” Basheer adds, “Sometimes we see people walking inside Ravindra Bharathi auditorium while the play is on and phones used to ring during a show. Thankfully that has reduced.” 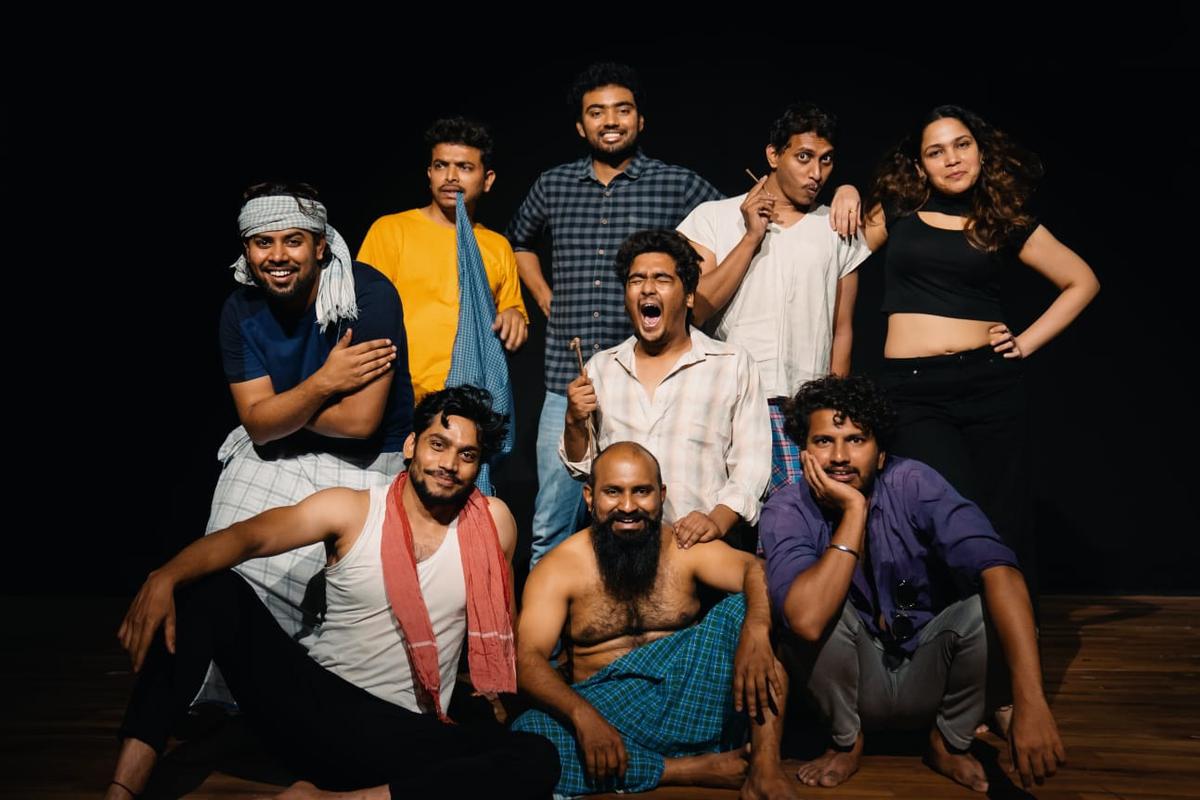 Devised drama has been slowly making inroads into Telugu theatre. Jay explains, “There is no concrete script in a devised production. Each actor comes up with a suggestion to develop the story into an hour-long performance. Ideas that are convincing and seem different are chosen by the director.” He recently directed Jammikunta Drama Company, a horror-comedy that was a devised production with scenes suggested by the artistes.

The groups also prefer to have production-oriented workshops culminating in plays with newcomers. “Unlike established artists who balance cinema and theatre and can give limited time to the stage, newcomers are sincere and stick to the schedule. The play at the end of a workshop is an incentive to them,” elaborates Vikas Chaitanya of Bridge Theatre.

A major challenge is the cinema dreams of budding actors. Most youngsters, Udaya Bhanu Garikipati of Bhoomika observes, join workshops to eventually act in movies. Bhoomika has rolled out artists in 15 batches and continues to get such youngsters. “Most Telugu theatre actors are film aspirants; Hindi and English Theatre also have such issues but in Telugu theatre, youngsters approach movie auditions just after rehearsals.” Minimalistic set design and aesthetic makeup are also areas that need improvement in some plays. “Not all Telugu groups are educated in that aspect. If we gain knowledge by attending classes/workshops can be a value addition,” adds Jay.

Bhoomika’s first show is ticketed followed by plays staged for free at apartment complexes and community halls as part of its ‘mungitlo natakam ’ (plays at the doorstep) initiative. “It was frustrating to wait for the audience in auditoriums. Instead, we began going to their apartments to stage plays so that we can connect with more people. We also insist on having a storytelling session for children before staging the play to build future audiences for theatre,” says Udaya Bhanu, who has a different perspective about production-oriented workshops. “How can one determine the quality of a production rehearsed in 45 days by amateurs? A good quality play will draw the audience whether it is ticketed or not,”

Veteran theatre personality and film actor Tanikella Bharani has the final word. “When people witness the magic happening on stage, they will come. The iconic play The Mousetrap was staged daily for 65 years without a break. Telugu theatre should grow to such a level where the people fight to buy tickets.”